Early last December I bought one of Bachmann’s Birney trolleys, and it got its first run at the 2011 Christmas Rusty Spike party. It was a bit of a disappointment because it didn’t run well, and considering what it cost, I was expecting at least the basic function of running around the track without constantly stopping to work just fine. I had cleaned the track, and my other locos were running ok, so the signs pointed to the Birney. 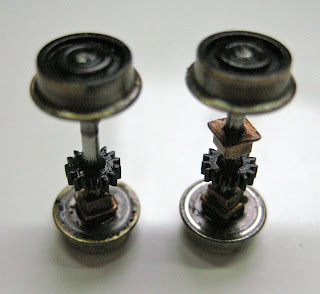 [These are the wheels after I had done an initial stripping in December and run the Birney for many loops on the layout. I was a little too enthusiastic with the gear oil, so they got a bit gloppy and picked up gunk during the course of operating. So, this is what the wheels looked like prior to another round of cleaning last weekend.]

Yeap, the store where I bought it did run it up and down its test track, but I should have paid more attention that it had to be given a little nudge to get it going.

Long story short, it was only picking up power from one pair of wheels, and it looked like all the wheels had been completely coated with paint in the factory: fronts, which is ok; backs, where the pickups touch the wheels to draw power; and treads, the wheel surfaces that contact the rails. Basically, not much power was getting to the motor because paint was insulating the flow. After the Rusty Spike event I lightly sanded the wheel backs and treads, and oiled the gears a bit. This fixed things somewhat. I also found that the instructions recommended - on a back page - running the model for several loops at moderate speed to break it in, which I did. Frankly, although it was much better, it still seemed to run rather erratically compared to my other locos. 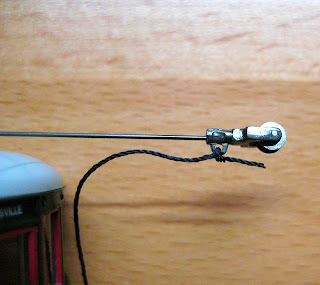 [The Birney also had a couple of minor aesthetic issues. One was the cords to the overhead pickups. You can see there is untrimmed thread which looks a little unsightly. Also, the opening picture shows the thread to be so stiff that it twists in such away to not obey the laws of gravity. Actually I should replace both the stock threads with something that droops properly - that's for next time, this go round I just trimmed off the excess at each end.]

Erratically enough that I didn’t feel it warranted - even after what I feel was unusual maintenance work on a brand-new loco - lifting my C grade on it. You know, I’ve had lots of good experiences with Bachmann locos. The two CN diesels, that I still own, that were given to me as presents 40 years ago, still run fairly well, and my current 70 ton and 45 ton HO Bachmann diesels run very well (I rank those two as solid Bs, not because they have any problems, but simply because they are solid performers and have an average level of detail, no flaws per se, simply that they don’t have something special to push them to an A grade). I was rather disappointed. For comparison, the Con-Car PCC TTC streetcar I bought last spring is an A. Clean and precise detail, combined with excellent operational performance. Debra listened a lot to my whining about its cost, but at least it’s an excellent product. 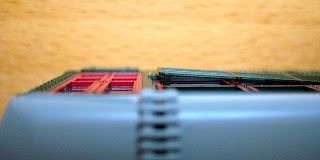 [As well, those slat panels running along the lower half of the windows were warped on both ends, and they wouldn't snap into the corresponding window holes. I carefully used small dabs of glue to flatten them out and hold them in place.]

I finally decided to remove the Birney’s wheels again, soak them in SuperClean over night to try and strip more paint from them, and sand them a little more, because I was still bothered that it didn’t run properly. I also fiddled with the power pickups a little to make sure they all contacted the wheel backs. All this seemed to have done the trick. After re-assembling the power truck, and applying a dab of oil to the gears, the Birney ran smoothly and picked up power from both wheel sets. Now I’d give it a B. 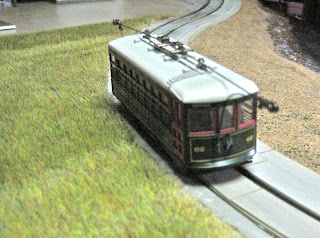