Train to the launch pad 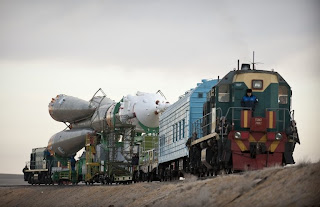 I was reading an article this week reporting that the Voyager spacecraft will soon be leaving the region of space under the influence of our Sun and heading into interstellar space. The article eventually led to a NASA photo archive site, and being a train person I decided to search on ‘train’ to see what would come up. Among the results were some great photos of the train used to roll-out the Soyuz spacecraft rocket to its launch pad at the Baikonur Cosmodrome. I’d recommend going to the NASA site directly to get all the details if you’re interested. There’s lots more photos other than these two I’ve posted, and they certainly provide some intriguing ideas for developing a freelanced launch pad layout. 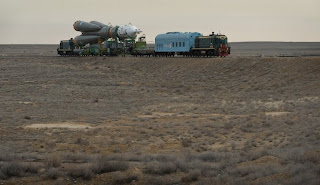