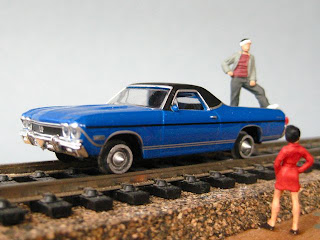 I was browsing through some old issues of Model Railroader and came across this one from February 1982 that kicked off John Olson’s series on building the Jerome & Southwestern. 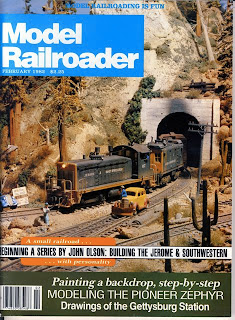 The cover scene got my attention. I particularly liked that 1940s (1930s maybe? - I can’t say for sure) vintage car on rails. I don’t know if those sorts of things actually existed, but it got me thinking about building more modern versions. An El Camino seemed to me ideal for this sort of conversion – and it turned out to be dead easy.


El Caminos get no respect. The popular media certainly depicts them as down-market transportation. Unfairly so I think.
There were a couple of weeks last summer where I would see one particular 1970s El Camino almost every day on the highway during my commute to work. It clearly had been restored to factory-stock condition. I was surprised at how small it seemed compared to the modern pickups and SUVs - it almost seemed like an economy car. No doubt with today’s engineering, a re-imagined version probably could be one. But, is there a market for them? I have no idea.
I started with a Model Power 1968 El Camino and an unpainted N-scale Atlas hopper car I found in the re-sale bin at the local hobby shop for $4.95 – this turned out the be the cheapest way to get some N-scale wheels for replacing the El Camino’s wheels and tires. Simply pull the axles and wheels from both items, cut the N-scale wheel-sets in half, insert them into the wheel wells in the E Camino, adjust the spacing so the car sits properly on the track, apply glue to hold the wheels in place, let dry, and, bingo, you’re done. The N-scale wheel sets are all plastic. This makes cutting and gluing them easy.
I have a number of 1/24 scale El Caminos, and its Fordian cousin the Ranchero, in my kit stash. And I’ve actually built a couple 

The first one was the El Camino Estrella kit-bash that I submitted it to StarShip Modeller’s Gallery when it was done. It was posted, and to my surprise I received a number of complementary emails about it - it was the first and last time that happened  It seemed to have struck a chord.

The second build wasn’t an El Camino, but its little Dodge Boys’ cousin, the 1980s Dodge Rampage. This was an extensive kit-bashing project that really pushed my skills. It’s certainly not perfect, but I rather liked the results. 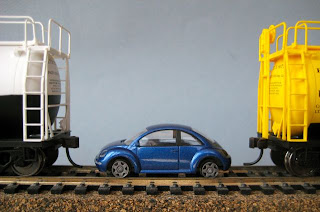 I did the same road-to-rails conversion on a New Beetle that had fallen on hard times. One day I was vacuuming dust from the layout with my Shop-Vac and got a little too focused on picking up dirt and accidentally sucked back this bug from its parking spot. I was only able to find the body and chassis unit in the dust bag. The front seats and a tail-light were nowhere to be found. Given that it was just a pile of parts on my workbench, I figured it was a good candidate for conversion.

I used the same process that was applied to the El Camino. The only difference being that I glued the New Beetle’s wheel covers to the N-scale wheel-sets, and cast the missing tail-light with some Micro-Kristal-Clear.
I guess the problem with these rails cars is just that, they can only be used on the rails. I have an idea for a truck conversion for transporting these things over the roads that hopefully I can start to work on soon.