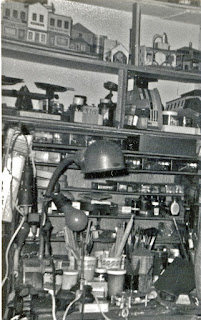 This is a high rez slice of E. L. Moore's workbench from his March 1971 portrait which will be used at his wikipedia bio. I've done a little bit of processing on it to lighten-up the shadowed areas on the shelves. 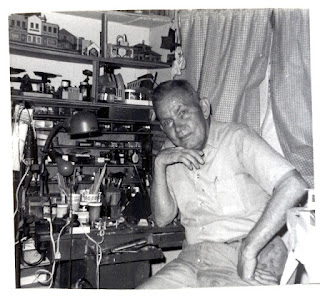 There aren't a lot of labels to read, but there is a box labeled KADEE roughly in the middle of the shelf. No doubt a box of Kadee brand couplers. As well there's what looks like an engine house casually stashed on the second shelf from the top, over on the right. There's a water tower on the bench across from his elbow. Is he working on it, or is was that just a convenient place to drop it? His bench looks like that of many modellers, lots of stuff and tools placed here, there and everywhere, and not too much space left for the model being built. He was also known to work from tv trays and an easy chair, so maybe the bench wasn't used for actual work, but as storage and staging area?

Take a look at the window in relation to the bench, and go back and take a look at the window corner in the window corner post. The spacing of the wall and window elements is very similar to those in this photo, if not identical, which suggests the photos were taken in the same location, in the same apartment. I can't prove this, but there you go. More food for thought in the ongoing investigation :-)
Posted by J D Lowe at 8:16 AM