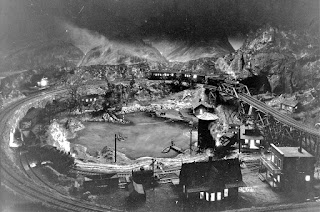 
Again this fall I decided maybe I’d get rid of that 4x6 Elizabeth Valley. I turn on the lights, pull back the dusty plastic cover, then for no good reason at all clean up the tracks and give her a try. Once a year, I do this. Nostalgia gets me, and I decide not to bother to sell it. But out in another room I’ve got a railroad yard about the same size which served as a basis for an article and photographs Linn accepted last spring -- and I don’t need two railroads, neither of them operating in the strict sense, because I’m not much interested in operations. I merely like to build and photograph the results, then I’m through, except maybe to write an article about it.
[An excerpt from a long letter E. L. Moore wrote to Andy Anderson, an editor with Model Railroader, in December 1965. The "railroad yard" is his 1900 Shortline Terminal Yard that appeared in the January 1967 issue of Model Railroader]

Blogging retirement sucks. I thought it would cure what ails me, but no dice.

For the last two years or so I’ve been on a roll; there were lots of interesting things to write, and I got into the groove of posting something every few days. Things started to wind down, but my mind was stuck on posting, posting, posting. Obsessive personality. It caused me some stress. Other things needed my attention and here I was stuck thinking I had to post at the old rate no matter what. I figure the thing to do is just get back to posting now and then about what grabs me, and if things pickup, then I’ll reassess.

But, I had lots of interesting discussions while I was contemplating the rocking chair. One thing I realized was that I hadn’t taken any time to try and summarize what I’ve learned on the E. L. Moore trail. I had focused on the pieces, but hadn’t done much on stitching the story together. I’d done it in my mind, but hadn’t tried to write it down. This post will hopefully be the first of a series where I try and write the big story.

Look, I’ll tell you up front that there are still lots of unknowns in this story. On the one hand, it seems like a lot has been found, but that stuff often just serves to remind me that I’ve only scratched the surface on E. L. Moore’s life story. So, as we go along I’ll make some speculations based on what I've learned. They’re my best guesses based on what factoids I've found, but they could change as new information comes to light. My speculations will be noted with (?). Just bear this in mind as we get going. Also, if you've been following the E. L. Moore series you'll see there isn't any new information here, just pulling the pieces together.

I’ll start with summarizing what's known about the layouts and layout-like things E. L. Moore built. Here's a list of what I think are his layouts, and things that seem like layouts:

I should note that in an interview with E. L. Moore that appeared in the September 1975 issue of Model Railroader, Gordon Odegard noted that E. L. Moore's very first layout, predating the Elizabeth Valley RR, was a 4'x6' Lionel O27 based setup. I haven't seen any photos of that layout, nor have I seen it mentioned elsewhere, so as a mystery, it's quite mysterious and could add another wrinkle to the material in this post. 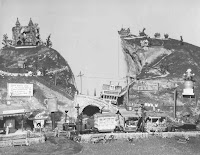 You can see a large picture of the diorama here, and all the Rowland Emmett related E. L. Moore posts are tagged with Rowland Emmett.

A collection of temporary scenes featuring a fictitious narrow gauge mountain railroad - modelled in HOn2-1/2 - in an unspecified US location, situated sometime in the late 1890s or early 1900’s. Some of the scenes were staged on The Elizabeth Valley Railroad, but the EKRR wasn't a permanent part of the EVRR.

Fate: All scenes were temporary dioramas that were taken apart sometime after being photographed. 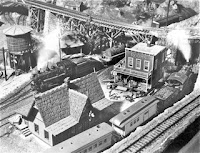 A 4’ x 6’ HO scale layout based in a mountainous region surrounding a valley with lakes.  Set in an unspecified US location sometime in the late 1890s or early 1900’s. No industries; survives mainly on tourism and maybe some logging. The layout was named for his young daughter.

My first post on this layout can be found here. In that one the track plan was still unknown and I tried to figure it out from photographs. The plan came to light just this year when a generous reader forwarded me a photo of a postcard with the track plan on it that E. L. Moore had mailed him in the early 1960s. That unlocked a lot of activity on revising the track plan and preparing to build an N-scale version.

You can find all the Elizabeth Valley Railroad posts tagged with EVRR. 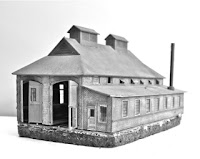 An extensive diorama of a US shortline terminal yard situated sometime around 1900. It wasn't an extension of his Elizabeth Valley layout, but it was stylistically similar. In September 2015 I saw all the buildings that made up this display. I consider this to be E. L. Moore's masterwork, and if you only read one article by him, I'd recommend the one about this display that appeared in the January '67 issue of Model Railroader.

Fate: Like the Elizabeth Valley RR, it too may have been sold or discarded in '68 or '69 when he re-married (?). As of September 2015, all the structures appearing on the diorama were owned by two North Carolina collectors.

A 30” x 30” layout situated in a mountainous region surrounding a lake. Set in an unspecified US location sometime in the late 1890s or early 1900’s. Combines 3 scales: N, TT and HOn2-1/2. It's a tourist line; no industries. It was built primarily as a project layout for Railroad Model Craftsman. When Model Railroader's editorial staff got wind that Mr. Moore was building this layout, they offered him a deal to write a book that would be similar to their HO Primer, but for N scale. Given Kalmbach's publishing clout, and E. L. Moore's stature in the model railroading world, that book might have made E. L. Moore one of the founding writers in N scale layout building.

All posts about the Enskale & Hoentee Railroad are tagged with EHRR.

Fate: Unknown. Soon after construction it was loaned to the North Hills Hobby Shop in Raleigh, North Carolina. In 1980 it was sold to a North Carolina model train collector (?).

Two things are clear: E. L. Moore loved the mountains, and the late 19th and early 20th century era. He was born in 1898, so that time corresponds with his boyhood. Many model railroaders, myself included, set their layouts in the time around youth, so maybe that's not too surprising. As for the mountains, he may have tramped through the Great Smokey Mountains in the 1930s (?), and he was a self-described 'vagabond' during that time.

His layouts don't depict any particular prototype, but are collections of things he loved - his ideal world. His layouts steered clear of depicting or servicing industries, which is interesting since many of his articles dealt with building a variety of industrial facilities. 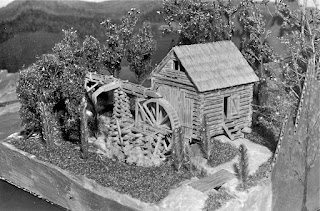 Strictly speaking, Mr. Moore only built one personal layout, The Elizabeth Valley RR, but there were many dioramas. It's a bit difficult to know where to draw the line on what to include in this post. There were other significant dioramas like the Water Wheel Mill, the Wild West Show, the hinted at zoo, the HOJ POJ Manufacturing Co., the Canal Boats, golden spike laying at Promontory Point, and numerous elaborate setups for illustrating construction articles. And at times he used the Elizabeth Valley layout to stage and photograph other scenes. I chose the dioramas I did as they were major projects and seem to encapsulate his enduring interests.