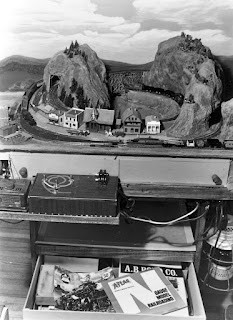 Maybe you remember that E. L. Moore created a little stir when it became known that he was building a small N-scale layout, The Enskale Hoentee RR, for Hal Carstens' Railroad Model Craftsman. One almost outcome was Model Railroader offered him an opportunity to write an 'N-scale Primer', something much like their popular HO Primer, but he turned it down. The Enskale Hoentee construction story appeared in the Oct, Nov and Dec 1968 issues of RMC, and that was sort of that for E. L. Moore's dip into N-scale.

But, Mr. Moore did give his friend Bill Rau, an associate editor at MR, a look behind the scenes in this letter about life during the early phases of layout construction. The photos didn't accompany the letter, I found them in E.L. Moore's files., but they seem to go together.

To Bill Rau, Associate Editor of Model Railroader, after answering his brief card with a brief card of my own. Wanted first look at my N scale offering if not committed to Railroad Model Craftsman, which it is.

Dunno why sometimes I have to answer letters so quickly. And then a little later think I'd like to have said more. For me, I was rushed this morning. Not actually, but I got up a little early, about seven (three hours too early), took a couple of pictures of a model to go with an article, writ the article, or rather finished it up, having got out two drafts of it yesterday, and writ a couple of short notes. For me, that's a day's work anytime. 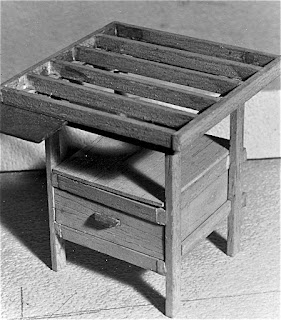 Hadda take time out, Velvet hops up on the back of my chair and plumps her paws on my shoulders and wants some attention. Sometimes I think she hates to hear me type because that's when she interrupts. 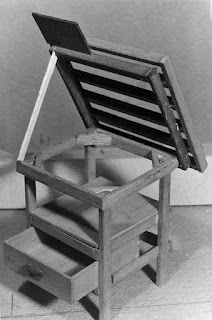 Evening now, chicken stew and dumplings downed, half a cup of coffee drank and the paper looked over and the rest of the coffee down the drain. Whatta tough life I lead ! Gotta develop a couple of films soon and tomorrow night print a couple of pictures -- hate to set up things for just a couple, but kinda said I'd have the article off by the first and just got around to beginning it yesterday. Gotta be in the mood, lad, gotta be in the mood. 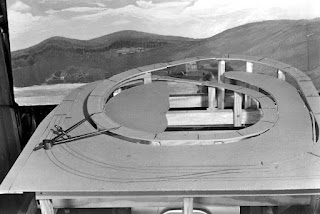 [A grid of vertical sticks were used to hold up the track roadbed.]

All those literary mags tell you to hell with moods you gotta sit down and type every day so many hours. And I say the hell with them I'll do it my way. Anyway I'm not working toward a Nobel prize or Asquith cup, and what I don't do today leaves something for tomorrow or the day after or manana. Never have worked toward a deadline, but once in a while I do say I'll have something ready by maybe the first of the month if I happen to feel like it. 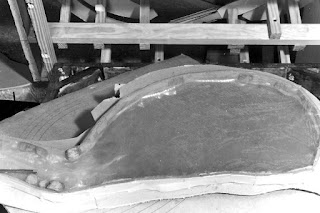 [There's a lake in the middle of the layout. Here it is under construction.]

Kinda wound up in this N scale. As I sez, Carstens made a suggestion and I kinda ignored it for a while, then all at once it sorta hit me and I got out of bed in the night to look up some stuff -- from then on I read back to those formerly ignored articles and Trade Topics, sent off for about every catalog in the country (one box filled with N scale catalogs now) worked up a track plan that had lain dormant for years with only now and then passing thought, planned a stand and built it of balsa to the scale of one inch equals a foot (looks better than the stand itself which I've just completed, on account maybe the little one has a drawer which I haven't got around to making for the beeg one). 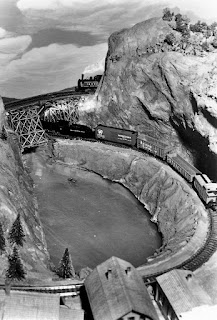 [The finished lake installed between the mountains.]

But I never would have tackled a railroad of any size -- actually this won't be much, just a loop-de-loop with a couple of sidings, just something to have fun with, and dependent largely on the scenery for effects, which is maybe why I wanted to build it. 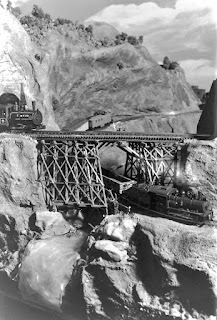 [The lake fed a waterfall that spilled over the side of the layout.]

Unlike friend Crosby who patronizes his home hobby dealer, I'm a close man with a dollar and I'm shopping around. Fact is, there isn't a hobby shop here worth the name. A friend of a friend (I've met  him once) has a good shop, so I understand, in Raleigh. I loaned him quite a few of my models to use as display, built a water tank for him, and ordered some stuff from him. But loyalty just goes so far -- I ordered some paints back in early December and got them middle of January -- he just didn't have them in stock. True, I didn't really need them. I like to order stuff far enough ahead so's to have it when I do need it. And I can't really complain -- he also returned my uncashed check. 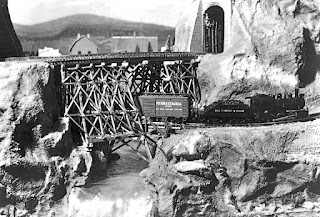 But you can't build a railroad thataway. So what I'm ordering through him is something I don't need in the near future. From a fella up in Pittsburgh with only a box number I got my track (Atlas) and switches and foam roadbed and all like that at about  25% discount -- and he came through nicely -- from AHM comes stuff, no discount, but cheaper than I could order from some houses since postage is paid. Today comes a sheet from a concern with discount prices on some other items. TAB comes across with DPDT toggle switches and wire at a good price. From Northeastern will come about ten bucks worth of lumber, brick, etc., with always some extra thrown in although I've never asked for any favours. 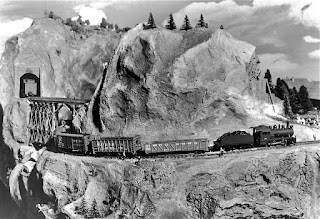 [Heading away from the waterfall and into town.]

But then I come from the country, you know, Ward and Sears were big stuff and I still ruther order even shoes and unnerwear and typewriter ribbons than to go to town and buy them. Just a quirk in my nature, maybe. Besides I love to beat the state out of sales tax, which of course you can't do with Sears or Wards but can with all other sources. 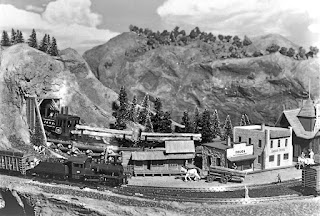 [When shot at eye-level the layout seems bigger than it actually is. Those two mountains, which seem fake and toy-like from a 'normal' viewing angle, appear to be like the edge of a vast overlapping range when viewed at eye-level.]

And Woolworth's ran Atlas freight cars, cabooses, and AHM stuff, Atlas at 25% off. I didn't hesitate. 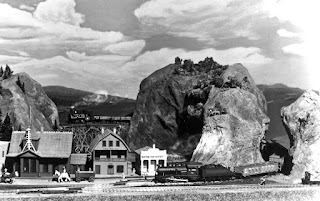 [The other end of town.]

We had some nasty weather, ice and sleet, and soon as it cleared away I ordered some strips and Upson board and day after it was delivered another two, three inches of snow. I didn't mind being snowbound. Why should I? Stay home and get paid for it. What could be nicer. But I didn't think a bit of sawing and drilling and driving of screws could be so tiring. No power tools of course and didn't want and for such a small project. Crosby says he's going to cut his stuff out in the garage so as to make no dust. Hell with that ! I had 14' strips to cut up, put one end across the arms of upholstered chair (well I did put a newspaper under 'em) and tother end on kitchen ladder stool as saw horse and went to work. No little woman to tell me nay. Hell, I've got more cat hair lying around than I'll ever have sawdust. Only way you can get cat hair off sofa is use a brass suede brush. And if one color doesn't show the other will as I've got both black and white haired cats. But no more li'l ones. Spaying took care of that.

Just about forgot how to wire a railroad, even a teensy one, so hadda read up. I'm real dopey on electricity anyway. Flex track, of course, then came remote switches instead of manual ones on account of these latter not yet being released or didn't have them -- with insulated frogs, I guess, it looks like, new to me, but I think I'll kinda like 'em at that. Remote is a joke on the Enskale & Hoentee when you can reach all over it like a boarder at the supper table. 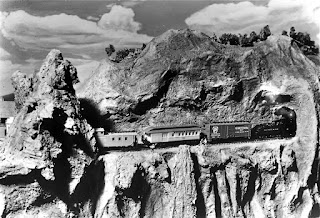 [Leaving town and back into the mountains.]

Well here we are end of page and end of gab -- gotta go develop film. My writing lies like hell -- sounds like I was an up and doer -- which I ain't, thank heavens, by golly. I'm really a sluggard.

P S Carstens send me some slippered pages from GEMS OF AMERICAN ARCHITECTURE the other day, Gems. Prototype donnickers, jakes, willies -- with a lot of smooth but sparkling gab with each. Next day came out a headline in our local evening paper SMITHVILLE GIVEN DEADLINE TO BUILD PRIVIES, which I clipped and sent him. Long live the privy -- it ain't dead yet!
Posted by J D Lowe at 8:01 AM