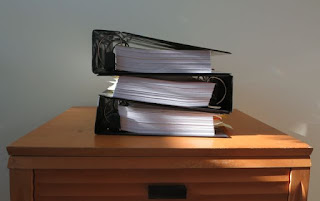 Over the last 8 or so months I’ve been reading and scanning a stack of E. L. Moore’s manuscripts and letters that were generously loaned to me by a collector. There were 1,189 pages, and as the lead photo of my reading copy shows, the scans more-or-less fill 3, 3” binders. This material covers the years,

As you can see there are gaps in the record, and material prior to mid-1961 and after mid-1978 is missing. Given that Mr. Moore died in August 1979, there might not be much material for the post July '78 period, but there could be extensive material missing for the pre-1961 era given that his first published article was in 1955. As well, there could be missing items from the time periods shown in the list, but frankly, it's amazing that anything has survived all these years, and I'm very glad to have been able to see it.

From my reading of the surviving collection, I suspect there could be up to an equal amount of manuscripts and correspondence in addition to this material. It might be still out there somewhere; it might be lost; I have no idea. However, I've been alerted that there is a small collection of E. L. Moore original photographs in existence, and if all goes well I hope to see them before the end of the summer. I'm keeping my fingers crossed :-) My plan is to assemble all the E. L. Moore material I can find and put together some sort of book or digital collection.

Anyway, since I’ve come to the end of the collection I thought I’d create an index of the excerpt posts I’ve made along the way,

It was right in front of my eyes!

Keeping time with the Ceresota Method

E. L. Moore on getting older

E. L. Moore on the trials and tribulations of kits and kitbashing

I do my talking with a typewriter

E. L. Moore and the preamble to the RMC Paper Mill Controversy

Speculations on E. L. Moore, Folk Art and The Pulps

E. L. Moore and The Schoolmarm

E. L. Moore and the Influence of Bill Schopp

An E. L. Moore letter from 50 years ago today

The E. L. Moore Files: The Buddha, The Bookery and The Man Cave

The E. L. Moore Files: Characters or People or Both?

I do plan to post further excerpts as I go back, re-read stuff and make connections I didn't see on the first reading.