In the last letter, dated 11 February 1965, E. L. Moore pitched the 1900 era shortline terminal project to Bill Rau at Model Railroader. In that letter Mr. Moore thought the editors would provide suggestions during development he’d have to consider; however, I haven’t seen any correspondence on that. The next letter was Mr. Moore’s submission of the project on 4 May 1965

Mess of stuff here, but the yard inevitably follows the enginehouse, so here it all is. Take it up with Mr. ZIP and see what he thinks about it. He’ll probably say “takes too damned much space even cutting to half size HO.”

Anyway it’s kept me out of mischief these past few months and if you can’t use it, why I can still probably peddle it.

Along with that cover letter were the manuscripts for Brick Enginehouse (March ’67, Model Railroader) and Turn backward, O Time (January ’67, Model Railroader). It didn’t take long for them to be accepted. Model Railroader paid E. L. Moore $80 for both, but a handwritten note at the top of the acceptance letter says, “(I still think I ougtha got at at least a hundred bucks for these two articles signed ELM)”.

Frankly, I don’t know anybody who can really capture the flavor of a leisurely and casual short line operation the way you do; and since I personally am a short line buff, it sort of makes me a sitting duck for articles like those last two you sent us. I can no more resist them than I could resist a beautiful gal...in fact, I could resist the beautiful gal much easier because -1: raunchy short lines are hard to find, while beautiful (blondes - what is it about those Swedes ?) are a dime a dozen, at least in Milwaukee; and -2: my wife would clobber me but good if I cast sheep’s eyes at a blonde, but she doesn’t seem to mind locomotives and such.

All of which leads up to the fact that here is a check for 80 bucks for the two stories.

We plan to add the dimensions to the plans in the “Yard” story. And for your information, that ash hoist is modeled after one used by old Buffalo & Susquehanna, now B&O, at Galeton, Pa. Fred Pearce of Buffalo described it with a rough sketch back in September ’53, if you’re wondering where you got the idea. And the building plan you can’t recall appeared on the old HO MONTHLY - MODEL TRAINS before Kalpubco took it over, so we’re safe on using it.

I also intend to try and get Linn to use the enginehouse story as is. He prefers a factual approach; I think the story type thing you did here, which is similar to George Allen’s Tuxedo Junction series approach, may appeal to readers. However, Linn’s is the final decision, so don’t be surprised if we edit the “story” line considerably.

But personally, I like the wood enginehouse you did for one of the last MODEL TRAINS better than this brick ‘un. I still have those plans and I’m gonna build that wooden job when I finally get a place I can build me a pike all mine own.

I had thought of asking the landlord for part of the apartment cellar, but it’s all open --  and one family is moving out and the one moving in has a 12-year old boy. Need I say more?

And incidentally, I just reversed this sheet because I’m a thrifty Dutchman and can’t see using a separate sheet to finish this letter.

In a follow-up letter E. L. Moore notes that Bill was mistaken about who wrote the wood enginehouse article.

And it turns out the story the Brick Enginehouse article was built around was kept; however, editing was done: a middle section was deleted, a lot of condensing was done, and 'rough edges' were smoothed out.

Mr. Rau was right that the original storyline had overtones of a chapter from George Allen and Ernie Huebner’s Tuxedo Junction series that began in the October ’52 issue of Model Railroader. The edited version put it squarely in that vein. Linn Westcott himself made an appearance in part 5 of Tuxedo Junction, and John Page at one time noted the series was one of Model Railroader’s most successful, so maybe there was some nostalgia mixed with canny business sense that kept the Brick Enginehouse article more or less intact.

Although smoothing the story maintained the family friendly readability of the magazine, and economized on the article’s page count, something of E. L. Moore’s style was left out. So, to get a better sense of E. L. Moore's writing and story-telling skills, here are the unedited story segments from the original manuscript, edges and all.

My friend Andy Powers came busting in one evening and slapped down a couple of photographs he’d filched from some of his old railroad magazines.

“There!” he says, “There’s that enginehouse you’ve been sobbing about.”

At first glance all I could see was an 4-4-0 steamed up ready to gallivant. Then, in the background I noticed a conglomeration of architecture from which I pieced a partial view of an enginehouse roof. Andy shoved the other picture over. Here, half blocked by a mogul, was shown an ample view of the front of what was apparently the same enginehouse. The caption on one said the photograph was taken in 1901.

“I think you’ve got something,” I says in a rare burst of enthusiasm, only wishing they’d parked those iron horses somewhere else so’s I could have had an unobstructed view of the buildings. As if in answer to my thought Andy whipped out a sheet on which he’d made a couple of sketches, a front and a side elevation. I whistled my surprise.

“What you need m’boy, is a good researcher. That and a bit of imagination for seasoning equals this. Take it or leave it.

I took it. It was almost too good to be true. For months I’d been searching for something different in an enginehouse, and although I hadn’t known exactly what I was looking for I was certain this was it. Andy, who is an old steam fan with stacks of old railroad magazines, has installed himself as a sort of armchair model railroader and critic. Once he gets his old pipe stoked up he is generous with advice and suggestions but I’ve never been able to get him to lend a hand in any way of my various projects. He’d rather tinker with his muzzle loading guns, which is fine with me because I like ‘em too. So we have many a bull session with no infringement from the female of the species.

During my door hanging festival Andy commented: “I could’ve hung all six on the prototype in the time it took you to hang two of these itty-bitty things.” But think of the fun I had. I piddled half a day, hung two doors, knocked off and put the coffee pot on, read part of two books, rested two days and was then ready to meet the challenge of the other four doors.

That pretty well reviews the interior and when you have it done to your satisfaction, you can cement the left wall in place, You might take a moment to see that you have it right side up. It was just at this point, while I was giving thought to making windows that Andy came in. He looked over the assembled structure and I figured he was lost in admiration as he turned it this way and that. Finally he grunted a bit and reached for my HO ruler and did some measuring.

“Mm-m-m-m,” he muses, an evil grin lighting his face. “Nice going.” He then spent a good five minutes filling his fat pipe with kindling, rubber bands and slag, then reached for the enginehouse plans.

“It says here,” he began, looking at some marginal notes I’d made, “ ‘all windows are to be four feet from bottom edge’ .” He looked up with an amused twinkle in his eye. A sense of impending disaster smote me. I looked. Right wing OK. I look at the other side and let out a groan. I’d done it again. Seldom do I get through a project without the gremlins causing at least one goof, but I’m usually able to cover up my mistakes. But here, lard my britches if I hadn’t put the left wall on upsidedown!

After the first staccato burst of brimstone I managed a wry grin and decided to be philosophical about the whole thing. What’s done is done, split milk over the dam and all that. But to think I’d even installed the workbench, window height, without noticing. And made another measurement.

“Looks as though those workmen will have to stand on tippy-toe,” he chuckled, noting the five foot height. Well, after all what’s an upsidedown wall -- famous builders have probably topped that. Not likely to be noticed. And from here on out I could dismiss thoughts of gremlins, having made my one big goof.

Now for the cupola. Or rather, the two cupolas. You may find it disturbing to see one photograph with one cupola while the others have two. It disturbed me, too. I’d built the roof and had carefully placed one in the middle. I’d also finished the pen and ink drawings, the photographs on location, and was well into the construction details of the article when Andy ambled in. He examined the enginehouse with its upsidedown wall, all roofed and finished now . . . then he looked at the photographs. I sat there like a dog with his tail wagging, waiting for approval.

“Very nice,” he says, but with a trace of hesitance. “You wouldn’t mind a bit of belated suggestion, now would you?”

“Heck no, man, I thrive on that stuff,” says I, but not so friendly now.

“Can the chatter, man, and spill your grievance.”

“It’s just an idea, but I was thinking that a cupola at each end would maybe make it look -- er -- more substantial.”

“Now don’t go busting your buttons,” Andy protested. “No need of changing everything. Just for your own use, maybe. And there’s one other little thing. That upsidedown wall looks sorta plain and newish, as though it hasn’t been lived in much, and I take it it’s supposed to have been there ten or fifteen years.”

“Now my thought was,” he went on, dragging at his pipe, “if that was an ivy covered wall it wouldn’t look so bad.”

I gave one look at his shinny pate and says, “Maybe the ivy has died from lack of nourishment. Anyway, you think I’ve nothing to do but make changes?”

“Well,” says Andy soothingly, “to rephrase that old one about the farmer feeding his hogs, ‘what’s time to a man of your leisure?’ “.

He let the matter drop there, but he’d planted a seed of discontent and it grew overnight like Jack’s beanstalk. I was thinking about it that night when I dropped off to sleep and then darned if I didn’t dream I was watching a beauty contest and all those shapely gals wearing bathing suits came prancing out, each with a cupola on her head. All but the winner. She had on two cupolas, and her walls were decked with ivy -- or maybe it was fig leaves.

I sometimes wonder if E. L. Moore had had a layout building partner who was as skilled in layout design and construction as Mr. Moore was in small buildings and writing, who also had access to a large basement or garage, along with some ready cash of course, if together they would have built a layout, and written a series, that would have been on par with George and Ernie, or John Allen. 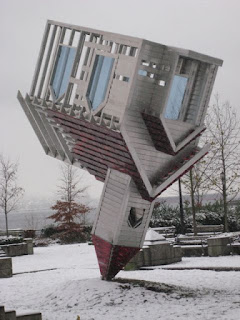