I’m of the opinion that E. L. Moore’s 1900 shortline terminal yard, that appeared as Turn backward, O Time in the January 1967 issue of Model Railroader is his masterwork as far as the published articles are concerned. In this letter to Bill Rau, an editor at Model Railroader, Mr. Moore pitches the idea.

It’s days like this that makes one want to go fishing ... or to sleep. Anything but work. Shirt sleeve weather and rolled sleeves at that. And walking works up a bit of a sweat. And since I’ve walked and napped and eaten and have no desire to read and work still is repulsive to think of ... why what better than to write you.

Fact is, I’ve just about finished an engine house ... brick construction, a little different, something like this:

Turn of century stuff, detailed inside, boiler room, machine shop, supply room and office. Probably 3000 words would cover, photograph of separate parts before assembly, and inside shot of joint and an outside shot of location. But that’s only the main hub. I have an idea something like Model Railroader visits a railroad yard. I have on hand a water tank, coal loader, sand house (brick) ash hoist and section shanty plus a few other items and I’m gonna build a (oh yes, turntable) a yard, not one of these modern efficient ones but a straggly one, line up to the turntable with the engine house just beyond, a line to the right and one to the left with these various facilities located. An over all shot and then close ups of the various facilities, short descriptions where needed as for instance brick sandhouse, refer back to Mar ’61 Model Trains on Coaling up, cinder pit like that shown sometime back in M R R and ash hoist similar to coal loader .... a yard that has seen better days but is still struggling. Probably take 5000 words in all and maybe a dozen photographs and some drawings most of which could be reduced to half HO as the engine shed would need be as it is 47 x 70 over all.

It’ll take me a couple of months, maybe three, but what’s time to a hog. Thought if you were interested you might want to take it up with Linn and then of course you’d have suggestions -- ugh!

Old Kalmbach finally hit again. News sent a reporter out .. this is at least the 4th feature article and what they hell good are they? Yeah, I get a fan letter from a widow ... I need a widow like I need a TV. Anyway I sent the old boy his clipping and he’s happy I suppose.

The last paragraph hints that Al Kalmbach, publisher of Model Railroader, arranged for a newspaper in Charlotte to do a story on E. L. Moore. One that eventually got printed since Mr. Moore could mail back a clipping. Fourth feature article? Was he some sort of notable local character?

I love a mystery so I tried an internet search to see what Charlotte newspaper archives were online. I wasn't successful, but I did find this ad in the 16 March 1939 issue of The Beaufort News at the North Carolina Newspapers digital collection. 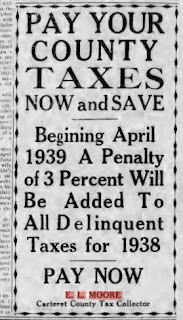 Beaufort is a town in Carteret County, North Carolina. E. L. Moore would have been 41 at the time and I think was then living in North Carolina. Was he a tax collector in Beaufort? I have no idea, but that is a curious ad. I can see some more research on the horizon :-)
Posted by J D Lowe at 7:16 AM