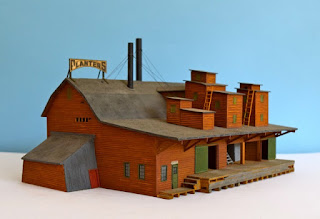 Recently Debra and I drove down to Raleigh, North Carolina to meet with two gentlemen who own collections of E. L. Moore buildings. Long-story-short, the collections, and the trip, were revelatory.

One collection consisted of E. L. Moore buildings that were part of the in-store model railroad at Jim Collier's hobby shop in Raleigh's North Hills Mall (the photos of a small number of E. L. Moore buildings I posted back in the spring - here, here, here and here - were from that collection). E. L. Moore was a good friend of the owner and bought all his model building supplies there. Jim Collier's son, Jim Jr., and his wife generously hosted the meet-up. The second collection, owned by J. R. Fisher, was once owned by E. L. Moore's friend, Fred Kelley. 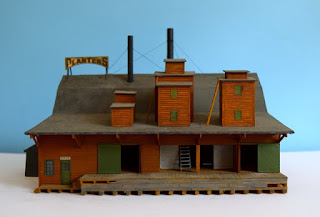 I was blown away. With both collections combined, there were 55 buildings, 11 outhouses and 2 boats. I'd hazard a guess and say this was the largest known assemblage of E. L. Moore structures in decades. Most were in excellent condition. Some had a little damage, but nothing serious. All were well preserved. Some had been packed away and hadn't seen the light of day in over 30 years. I spent the better part of 6 hours photographing them all: around 1400 images when the dust settled. Over the coming weeks and months I'll be posting pictures of every structure. 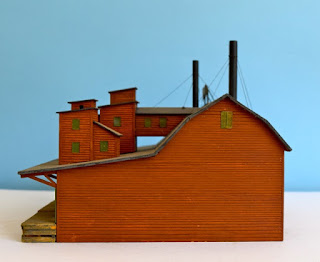 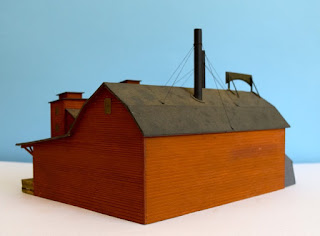 It was obvious that the pictures that appeared in the model railroad press all those years ago didn't always do justice to the models. The first impression of seeing them in person was as if had never seen them before - those relatively lo-fi magazine images of that '50s to '70s era were just approximations and not always good ones. In comparison to in person viewing, digital photography, and, not to mention, colour, those magazine images give an inaccurate impression as to build quality. It's not that Mr. Moore's photos were sub-standard, but the ability of the magazine printing processes to reproduce those images with suitable fidelity was often not there, especially if the mag's paper was on the pulpy side.

As well, seeing the models in person made it clear which projects were brilliant works of modelling and which were mundane. The Planters building is far from mundane, and in the picture below Jim points out one of many interesting details - a few missing boards in a side elevation. 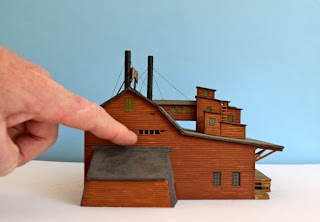 But - here's a problem - photographing individual models by themselves, without scenery, accessories or other props as I did, stripped them of some qualities that made an E.L.Moore project an E. L. Moore project. His articles consist of a model of course, but often include a story in the text, and that same story is communicated in the article's photos. The photos and the text combined told a story. His photos weren't simply beauty shots with figures and accessories added in for scale or colour; they did some heavy lifting; they also told the story. My photos don't have that. They focus on the models themselves without those important Moorian qualities. You'll see the craftsmanship, the colour, the detailing, but not necessarily the spirit of project. The message is: photographing the individual buildings brings some new things to light, but causes other important things to be lost. 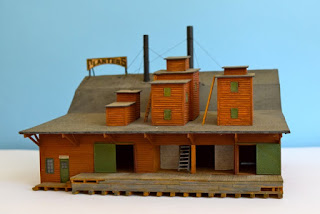 That brings me back to the Planters building - which appeared as The Fertilizer Plant in the July '66 issue of Railroad Model Craftsman. I had never paid it much attention. The article shows it off in the corner of a layout. Weird shape. Weird roof top add-ons. Weird image. But, not weird in person. In person, it's weirdly compelling. It's well built. It has an interesting and assertive presence with carefully executed details and touches. And that's true of many of the miniature buildings I saw and hopefully that will come across in future posts. 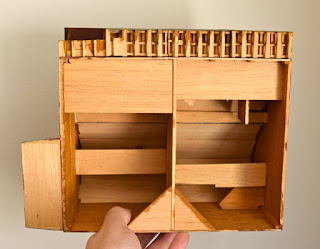