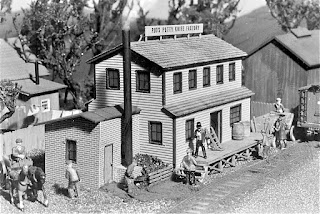 Life in the United States of America should never be dull, and yet I have the sensation sometimes that I am living in a vast industrial establishment, devoted to the manufacture of putty knives. ESSAYS by Elmer Roessner
The quote opening in H. Allen Smith's Life in a Putty Knife Factory, published by Doubleday, Doran & Co, 1943. 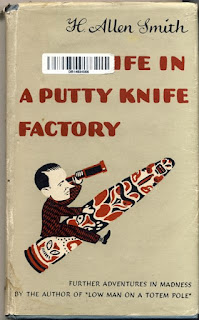 'Twas through the kind offices of your loyal helper, Bill Schopp, that the idea of a molasses mine was tendered . . . I thought I might as well make the most of it and could be some will actually believe there was such a plant. Every now and then Bill comes through with a postcard and a brainstorm thereon.

My grandfather Mohrslavoski's Putty Knife Factory will follow in due time. He was knowed as Pud, the Boy Puttier, or in his native land it would be translated as Pudzi, Infant Crack Healer. If you remember your history it was he who offered to putty up the crack in the Liberty Bell, and he also puttied up the Grand Canyon (on a map) and caused a good deal of furore, requiring that map specialists be brought in to retrace the course and dredge it out again.

He was also the inspiration for the title of H. Allen Smith's LIFE IN A PUTTY KNIFE FACTORY -- when he heard the mortar was cracking loose in Smith's skull joints he sent the noted author a german silver putty knife and some of his skull putty. He shoulda lived in the present day when skulls are cracked as a matter of of course in our daily lives.

I've read a few books E. L. Moore noted that he'd read, but H. Allen Smith's Life in a Putty Knife Factory is the closest in style to Mr. Moore's writings. Did E. L. Moore try to imitate Smith's style? Who knows? I've read only a few chapters and so far it's enjoyable. H. Allen Smith was a newspaperman and one of the most famous writers in the US in the 1940s. Life was a bestseller along with its predecessor Low Man on a Totem Pole. No mention yet of a Mohrslavoski though :-)
Posted by J D Lowe at 1:22 AM