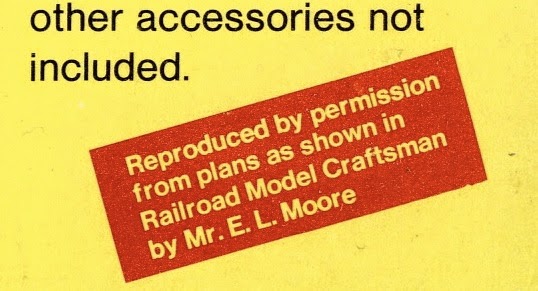 Some more notes on trying to make sense of the E. L. Moore legacy that I started with the post, The Tao of E. L. Moore.

I’ve gotten to the point in this series where it seems clear that E. L. Moore was not only a major figure in mid 20th century model railroading, but is also an unrecognized master of a traditional American folk art that might be on the rise in the world of folk and outsider art. The puzzle pieces have only clicked into place for me rather recently after reading this New York Times article back in November about a collector of folk art buildings; and with the resurfacing of some E. L. Moore models, photos from Bart Crosby and Fred Kelley, and the recognition that the ‘lost’ E. L. Moore construction articles weren’t lost after all suggested that this series might be part of a bigger story.

‘Folk art’ seems to me like a loaded phrase in the popular media. It conjures up stereotypical images of earnest people playing music on unplugged instruments about the dust bowl days, or un-reconstructed hippies making pottery or weaving ponchos. The reality is often quite different and more subtle. Folk art is simply a term to describe things made by people who haven’t been to art school, or haven’t received formal arts-and-crafts training, who use common, everyday materials to make art. They work outside the institutions and markets that constitute the officially sanctioned art world.  Whether they themselves perceive that what they’re making is art isn’t the point. These people are driven – for whatever reason – to produce things that have meaning and beauty. Their drive is the important part. They’re driven. Their work is often highly personal. The art, the making, the craft, comes naturally. It turns out that making small buildings, much like E. L. Moore and others did, might be a type of folk art if that New York Times article can be believed.

Making small buildings, small vehicles, small figures, small whatever, has been always been a part of the broader culture. I won’t go into any long winded historical analysis, but I’ll note that even when my grandmother took her training to be a grade-school teacher in the 1910’s right there in her textbook were lessons on how to instruct pupils in the finer points of making small cardboard houses and villages as a way to develop manual skills and geometric reasoning. The teachers-in-training were also encouraged to provide children with large sandboxes so they could setup their paper built towns – which were layouts of a sort. H.G. Well’s 1911 book Floor Games, and Edith Nesbit’s Wings and the Child or The Building of Magic Cities from 1913, further attest to the enduring popularity of building small worlds both with and without a railroad component.

It’s no surprise that in the formative years of scenic model railroading, or simply model railroading as it eventually became known, the craft of making accessory buildings from simple, on-hand materials like cardboard, tempra paint, wood sticks or model airplane builder’s balsa wood was dominate. There wasn’t a vast array of special materials and kits available like there is today, so that the folk art found new expression in model railroading.

After WWII many of the highest caliber model railroaders with the skills to make small buildings found their way into the model railroading press and wrote articles about using those folk methods to make quality buildings. Now, these people probably didn’t explicitly think, “how can I apply these old methods that I learned in school or from grand-dad to model railroads?” They merely took what was in the culture – methods, materials, practices and so forth –and applied it. And they often did more than just apply them, they extended them and developed new methods, which in turn eventually became the basis of advanced kits, techniques and practices that put us on the path to where we are today.

I won’t go into all the practitioners here, but of the classical small building folk builders in model railroading in the post WWII, mid 20th century period, E. L. Moore was the most eminent in the U.S. (there were many in the U.S. and U.K - and no doubt in other countries – and includes people like John Allen, John Ahern, Jack Work, George Stokes, Eugene Le Doux and many others). This folk period of small building construction in model railroading started well before E. L. Moore appeared on the scene, but it more-or-less was well over by the time of his death in 1979. By that time, advances in the hobby industry had long surpassed what was possible with the old methods. And today with laser cutting, die-casting, photo-etch and 3-D printing, that long gone folk era seems quaint and irrelevant.

What might be called the ‘folk art’ style of building construction is a small niche in today’s model railroading world. What with pre-printed card kits, pre-assembled items, simple plastic builds, and entry-level laser cut wood kits, ‘folk’ methods aren’t even recommended for beginners. So the interest in older, ‘folk’ based builds are with select groups other than mainstream modelers or beginners. There’s some interest from individuals who recognize or recall E. L. Moore and that era, those who have some knowledge about the history of model railroading, and those who have an interest in unique, low cost projects.

As I mentioned in the opening paragraph, this idea of a folk art influenced period in model railroading – and an associated folk art style – only became clear to me quite recently. In November I read an article in the New York Times about a gentleman in North Carolina who collected what he referred to as folk art buildings. These are model buildings ranging in size from say HO to several feet tall, built by various craftsmen, often unknown, mainly prior to WWII. The models are built from commonly available materials. There are no dollhouses, birdhouses or architect’s models in the collection, just various sorts of buildings made by independent craftsmen. After reading the article, the various aspects of E. L. Moore’s work that I had been writing about gelled: he was working in the same tradition as these folk artists, but working within the model railroading world.

The collector in the article mentioned that the main reason why folk art buildings aren’t yet a major branch of ‘Recognized’ American folk art is that it is very difficult to establish the provenance of the models. The director of the American Folk Art Museum in New York seemed to confirm that knowing who built the pieces and their stories is crucial for recognition of the works by collectors, scholars, and curators alike. I realized that what maybe was is going on with this series is that the provenance of E. L. Moore’s work is being established: reviewing his publication record, pulling together the remaining pieces of his work, trying out how he did things, tracking down his reference materials, interpreting what he did, and assembling it into some sort of whole to get the big picture. I’m not yet sure where - if anywhere - this is all going, but the journey has been interesting so far and fun.

Well, none of this may be true, but it’s interesting food for thought. E. L. Moore and his cohort were a type of artists, saying something about America through model railroading, but whose significance wasn’t limited to model railroading.
Posted by J D Lowe at 6:39 AM