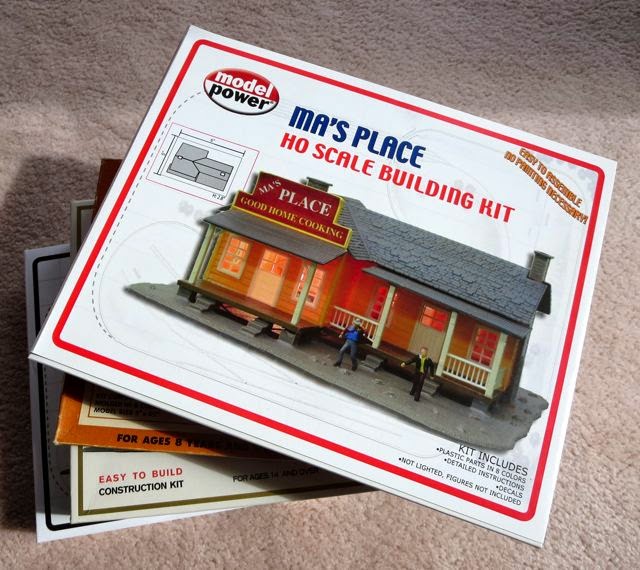 The next post or two in the series was going to talk about the E. L. Moore projects that were turned into mass-market plastic kits, their production history over the years, and kitbashing, among other things. The posts were likely going to be mega-posts. But, with Model Power - the company still producing a few E. L. Moore based plastic kits these days - announcing last month that it was going out-of-business, and considering a general urge I have to finish off a number of plastic based projects I either have on the go, or on the shelf suggesting I build them, I thought I’d make a start and chunk the series up into smaller posts instead of delaying until things were done. Also, it seemed fitting to try and write this part of the series while some Model Power kits were still on hobby retailer shelves and haven’t all disappeared to online re-sellers hawking them as ‘ vintage rarities’.

According to Jim Kelly in his article E. L. Moore’s legacy in the February 1980 issue of Model Railroader,

Six of E. L.’s structures have been offered as plastic kits by AHM: Schaefer Brewery, Ma’s Place, a molasses mine, W. E. Snatchem - Undertaker, Grusom Casket Co., and the Ramsey Journal Building. Thumbing through all those stacks of E. L.’s articles leaves you with the distinct impression that his influence is felt in the design of many another structure that has been offered commercially.

The completist in me had to go and match those names with the articles they were based on [2], 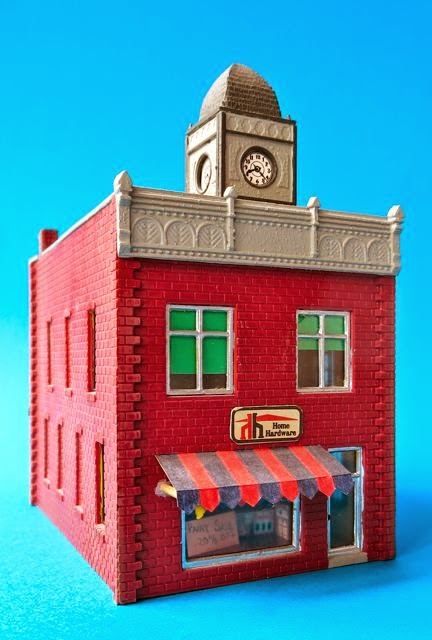 [I think this relic of the '70s is the Ramsey Journal Building which my young self converted to a Home Hardware.]

And like Mr. Kelly suspected there were probably others that may have been based somewhat on E. L. Moore projects. For example, back in the ‘70s I bought and assembled this barn / blacksmith kit. 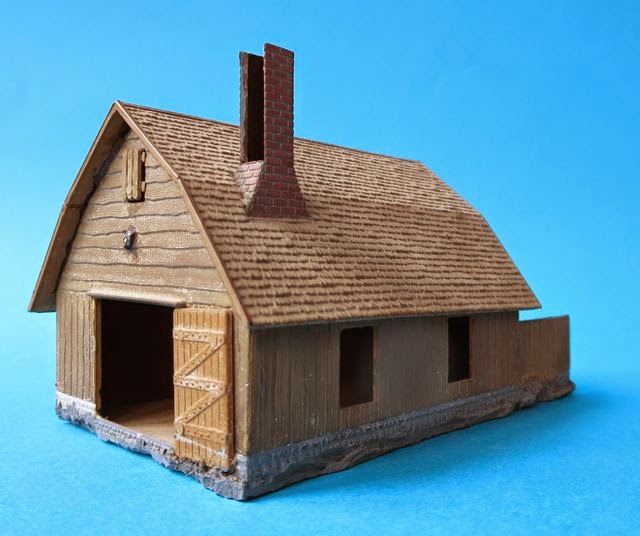 Well, if this were a super-hero comic book from the ‘60s or ‘70s this would be the ‘secret origins’ issue: where did those plastic kits come from, and what disguises are they wearing today? Read on for the mind shattering tale :-)

As Mr. Kelly states, AHM was the original manufacturer of those six kits, but ownership of them changed hands over the years. I don’t have all the specifics nailed down as to the hows and whys the kits changed corporate owners, and maybe it really doesn’t much matter, but it looks like the kits went from AHM to Tyco to Model Power, who markets some of them today - or did until they closed down in April (who knows what’ll happen to the kits now). I think the most important fact is that some of those kits have been in production for more-or-less 40 or 50 odd years and are still available after all that time. Although, the casual hobby-shop purchaser is probably not aware of their origins.

When it comes to secret origins, Ma’s Place is an interesting example. From the box art of Model Power’s current offering, it’s marketed as some sort of independently owned, backwoods eatery. If it were a set in a Hollywood movie, ‘Ma’ might be some 300 lb., burley ex-con gone straight, trying to make an honest living slingin’ hash and homespun homilies. There might be Harleys and F-150s of various vintages parked outside. Or, a remake of that movie might see ‘Ma’ as a hardworking single mom trying to make it in a man’s world by slingin’ hash and homespun homilies as she single-handedly keeps the bank from repossessin’ the family homestead. But, as we scholars of the Moore filmography know, Ma’s Place, as the legend goes in E. L. Moore’s article from the January 1967 issue of RMC, is actually Ma Spumoni’s house partially converted into a small grocery store whose intent – which was ultimately successful – was  to put out of business the recently moved-in-next-door outpost of the fictional corporate grocery giant, Porter & Ahlstedt [1]. It was a classic David-and-Goliath tale also not unfamiliar to Hollywood screenwriters :-) 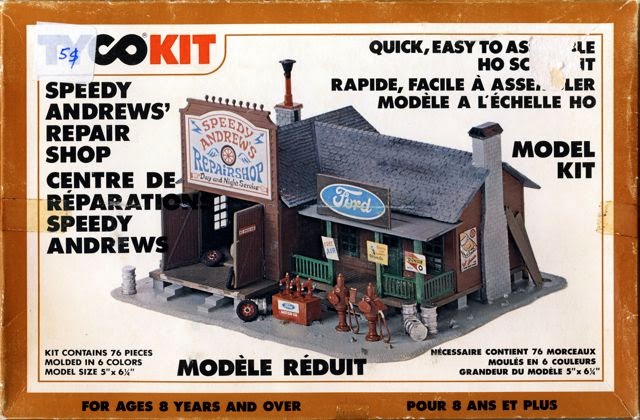 The kit manufacturers were crafty and used Ma’s Place - and a few of the others - as the basis of other offerings. For example, Ma’s Place also formed the core of what Tyco marketed as Speedy Andrew’s Repair Shop, and Model Power marketed it as Billy’s Auto Body. These derivative kits are some sort of early 20th century country automobile service station. It turns out that Model Power was extra crafty with Billy’s Auto Body as it contains parts to either build the auto repair shop shown on the box, or Ma’s Place even though no mention is made about Ma’s. 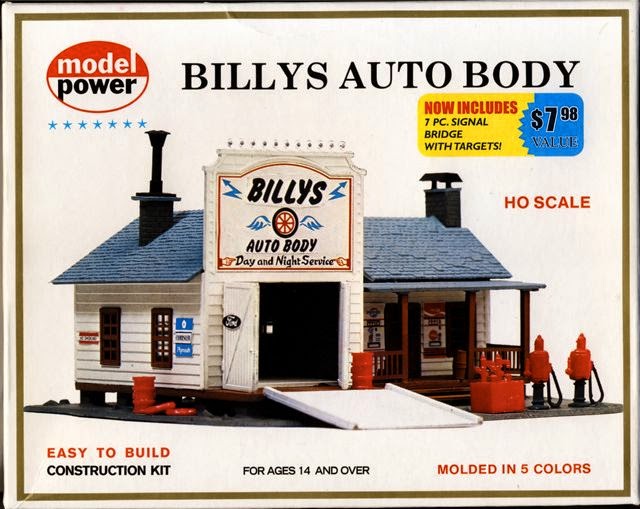 Plastic means malleable, so even though the box art of these kits imply one meaning for these buildings, you can make them mean - and build them - any way you want. The box art is merely a suggestion about how the parts can be put together. So, an old gas station can be a surf shop, bed-and-breakfast, sushi-shop, or whatever you have in mind. What I have in mind is an ocean-side diorama based on a slightly modified Ma’s Place, along with some of its derivatives, and maybe some other kitbashes, serviced by an ocean-side streetcar line. I’ll get things going in the next post.

{This is the 11th post in the E. L. Moore’s Legacy in the 21th Century series. A complete index can be found here.}

[1] E. L. Moore’s take on industrial and commercial concerns worth modelling is one of independently owned and operated businesses. There’s no globalized, multi-national corporatized, mega-businesses with banal cookie-cutter buildings. There’s none. Not even the railroads in the era he modelled – which were the Googles and Apples and Facebooks of their time – were big operations.  It seems that every one of his industries or businesses has someone’s family name on it. He modelled some big operations at times, but there was not a monster corporation in sight.

[2] {Added this note on 3 June 2014} It turns out that my old blacksmith barn kit is indeed another E. L. Moore project that was kitted by AHM. I stumbled across it at the excellent Tony Cook’s HO-Scale Trains Resource in the AHM section.  As well as the blacksmith, there are a couple of other additions to the E. L. Moore branded kits that were released by AHM, so my current take on the list of E. L. Moore projects that were turned into plastic kits is this,

There might be other projects that were kitted, and if I find any I'll update this note.
Posted by J D Lowe at 8:04 PM