I found Cousin Caleb’s Cabbage Plant to be rather poorly edited. Some statements regarding dimensions didn’t seem to agree with the plans, figure numbers mentioned in the text didn’t appear to be attached to any of the accompanying drawings or photos, and there were some dangling statements about boilers and cabbage processing equipment that hinted at more description in the article that didn’t exist. Those later passages left me wondering if the whole ‘sauerkraut juice’ premise was just another Moorian tall-tale. 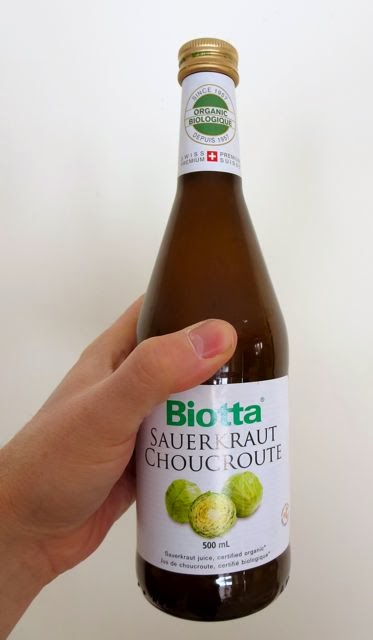 The wonders of the internet came to my rescue, and lo and behold, yes sauerkraut juice is an actual product and making it is big business. I downloaded a few pictures of cabbage processing equipment to help me cobble together something for this project, and decided to go look for some juice in local stores. It wasn’t that easy to find, but there was a health food store in the mall that had a few bottles. Long story short, one swig told me this stuff was not to my taste.

But, with taste testing behind me, I returned to the project and started to work on the perimeter frame.

First, I drew the front and side frames on a sheet of paper: my plan was to layout on the drawing the balsa pieces that make up the frames [1]. I guess I could have photocopied the article's plans from the magazine, but I wasn't confident about their dimensions. 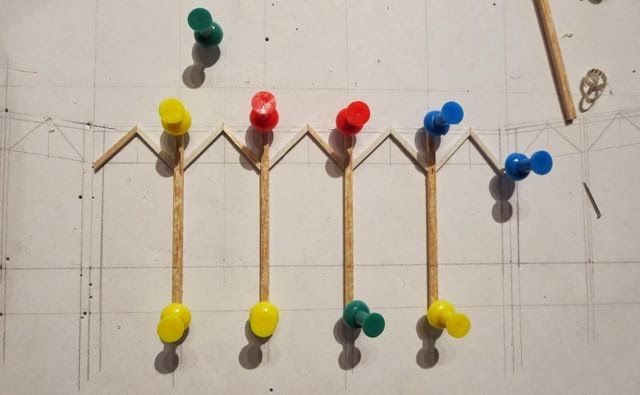 I pinned the drawing to a piece of cork-board I bought from Michael's, then cut the balsa pieces that make up the frame in accordance to the drawing, dabbed them with white glue and pinned them in place. Even though I laboured over the drawing, I still managed to screw up the size of the diagonals on the left on the front frame, so a little pushing and pulling and adjusting was required when all the sub-assemblies were finally glued together. 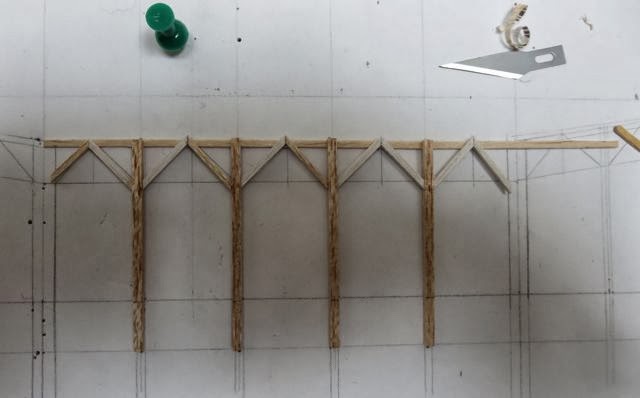 After the glue had set, I pulled out the pins holding the balsa in place and carefully dabbed the joints with super-glue using a pin held in a pair of tweezers as the dabbing device. After drying, there were a few little blots of dried glue at each joint sticking the frame to the paper. I slipped a brand new sharp knife blade between each joint and the paper to slice the frame free from the paper. Any little paper still stuck to the frame was cut off with a knife. Once free, I glued a horizontal strip of balsa to the back and top of the frame. This basic procedure to make all three frames. 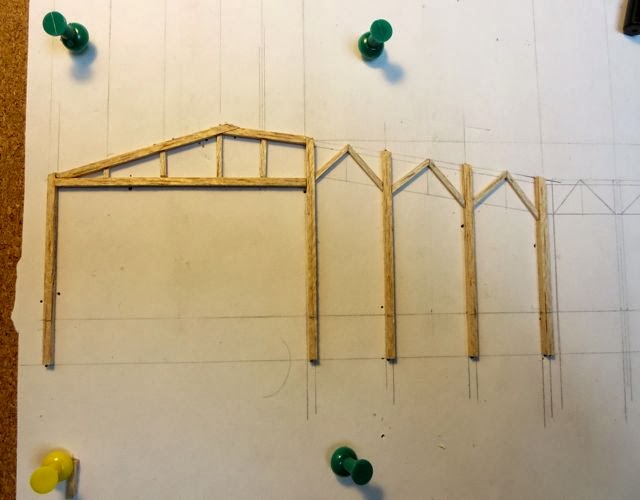 Here's the left side after it was glued up and before it was sliced free from the drawing. 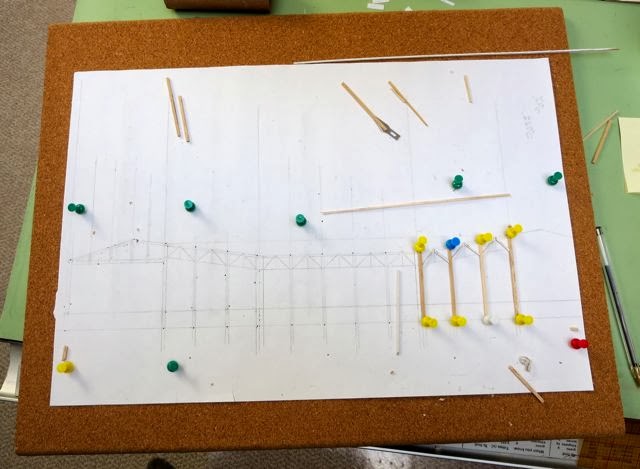 And here's the right side while the vertical uprights are being pinned down. Well, you can see that building the frame is rather involved. I'd say this isn't a project for beginners given the complexity of construction of the various sub-assemblies. 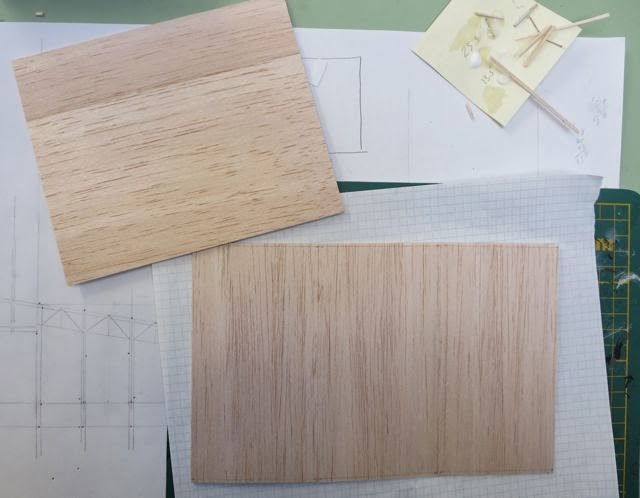 Once all three frames were built, I moved on to the floor. It's made from a 3/32 inch thick piece of balsa with a 1/32 inch piece glued on top with its grain perpendicular to that of the thicker piece. The thin piece over hangs the edges of the thicker piece on the sides by 1 mm. 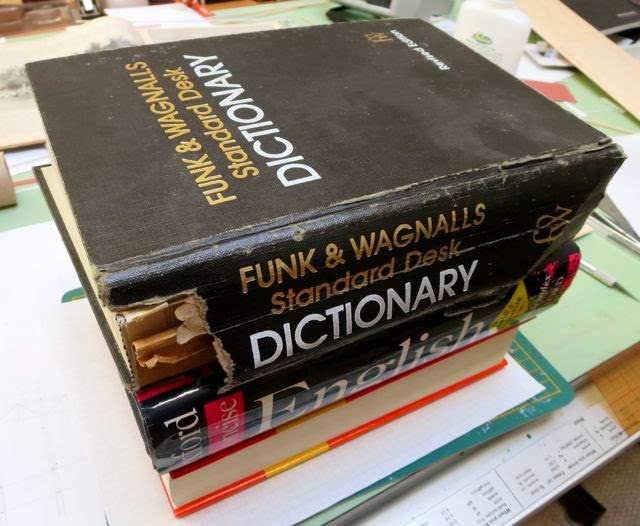 I used medium density superglue to bond the two floor pieces. Some big, old and heavy books came in handy to apply pressure to the laminate. I left this overnight and called it quits for the day. 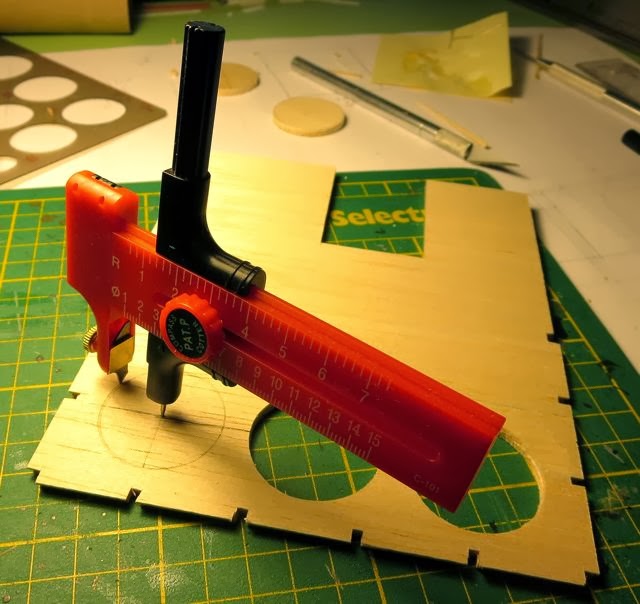 The next day I cut out the slots for the frame uprights, the openings for the circular fermentation tubs, and the rectangular opening at the rear for the boiler room foundation. The tub openings were first outlined with a circle cutter and then finished free-hand with a sharp x-acto knife. Slow and steady is the name of the game when cutting these openings. Here it is once the nerve-wracking circular holes were done. You can see I forgot to cut the slot for the upright in the back left corner of the floor - I realized it was missing a day or so later :-( 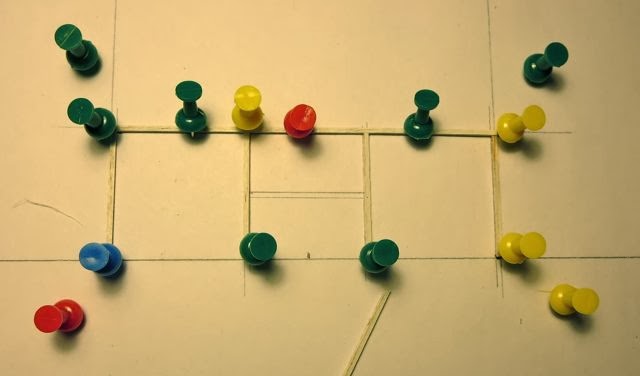 According to Mr. Moore's drawings, the front wall of the cabbage processing building is solid, like the other three walls, with a couple of doors. To open things up I decided to replace it with a wall that has large folding doors on either end and a centre panel that has a solid lower section with a window on top. This arrangement still allows the building to 'be closed up when cabbages are not in season', but might allow 'the boss' to see what's going on inside - well, anyway, that's the idea. So, I made a drawing of the front wall frame and built it up like the perimeter frames. 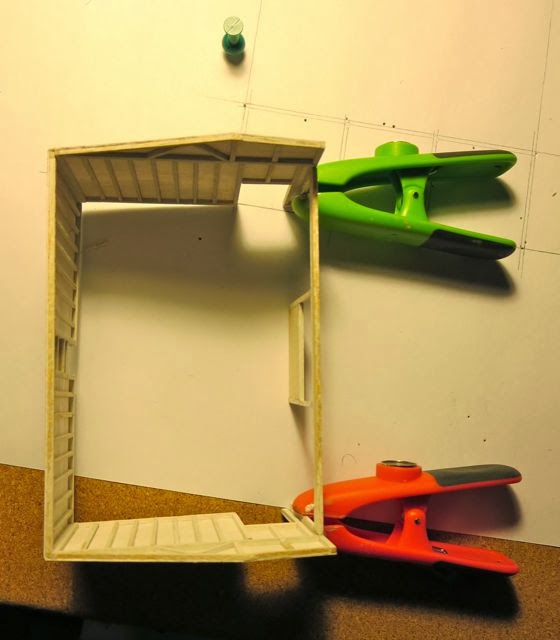 Once it was done, the front wall frame was glued in place with white glue, and some clamps held it all together while drying. 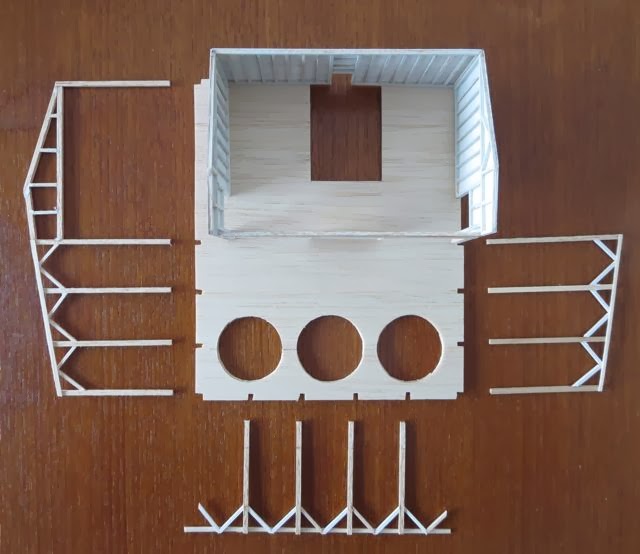 Here are all the pieces ready for a little staining before gluing them together. I used some very thin mixtures of red and brown acrylic paint. When dry, I dusted on some ground-up light gray chalk pastels and rubbed them into the floor. 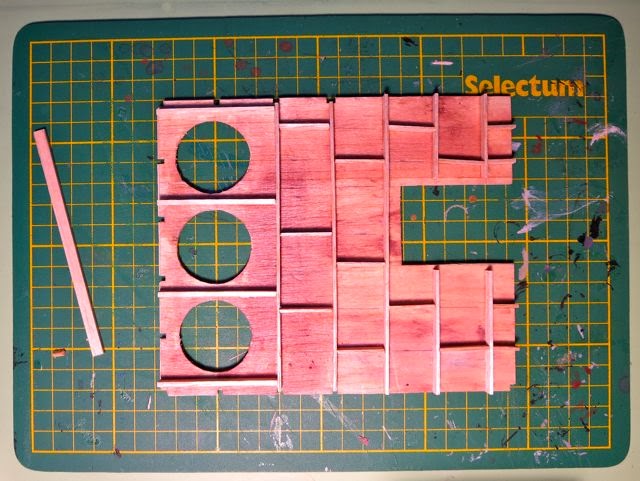 I should have known better, the floor is a big slab of raw balsa, and it absorbs any paint like a sponge - and has the stiffness of a sponge too regardless of how sparing I tried to be with the stain. A bit of warping happened. After carefully bending the floor back flat, I added some cross pieces to it's underside to stiffen it. The framework isn't prototypical, but it's not something that will be seen and does the trick. As you can see in the beauty shots, some work will need to be done on the ends of the stiffeners to make them look a little more plausible and blend them into the overall look of the building. 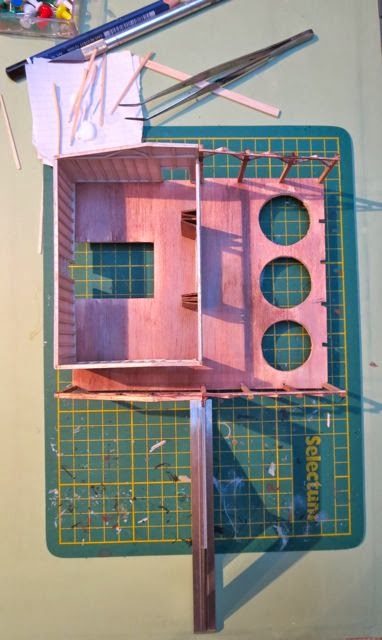 Once the staining was done, and the floor was stiffened, the sub-assemblies were glued into position. The picture above was taken during the action. Everything was glued in place with white glue. Once things were dry, I reinforced a few joints with judicious dabs of superglue. Here are a few pictures of what it looks like after assembly action was done and the glue was dry. 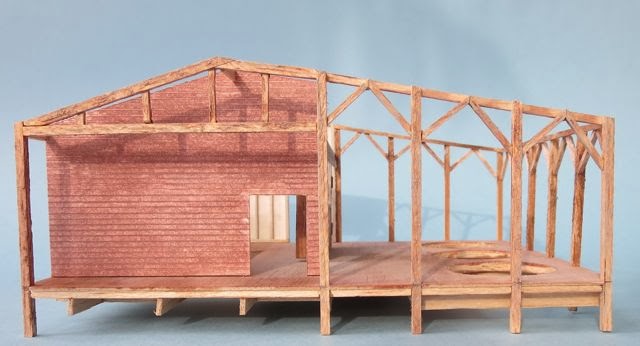 Needs some more uprights in the loading dock area. 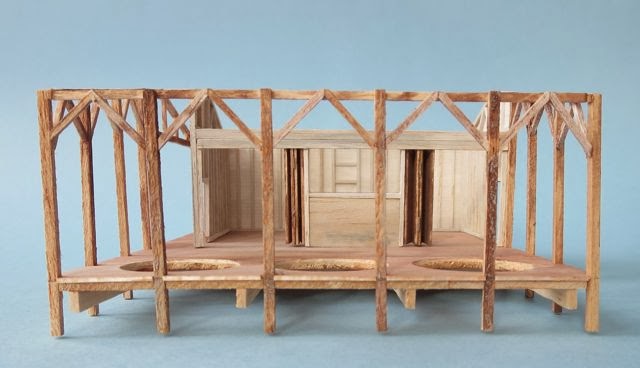 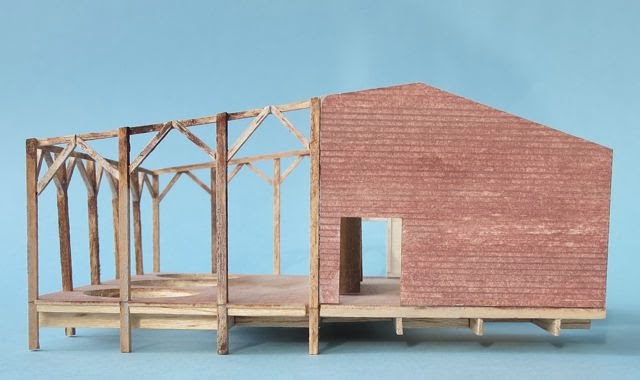 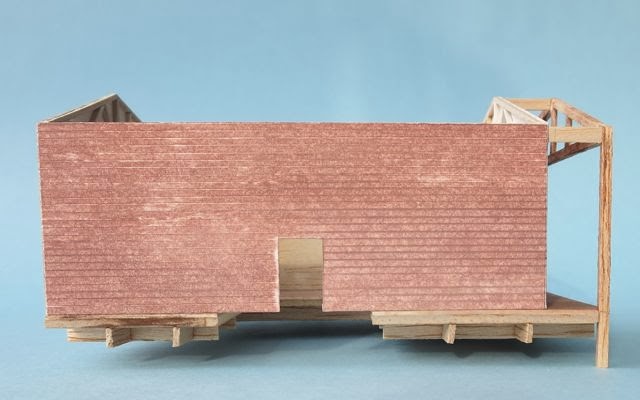 And more uprights here too. Also, that door-like opening is the top half of the door that opens into the boiler room. There's a sunken level that in the original incarnation was home to a boiler that drove the cabbage shredders. In this 21th century version, the cabbage shredders are electric powered and the boiler has been retired. 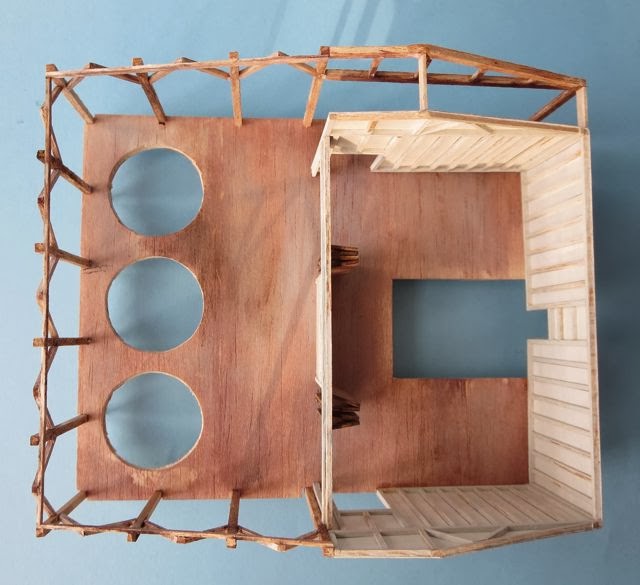 The old boiler room is a big opening in the floor, in the new version it will provide lots of storage for cabbages before being shredded. One other thing you can sort of see in this view are the folding doors - glued into their open, folded up configurations. Each unit is made from four pieces of 1/32 inch sheet. I was all engrossed in their construction and forgot to take any pictures while I was building them.

This is the 6th instalment in an ongoing series. The other parts can be found here. 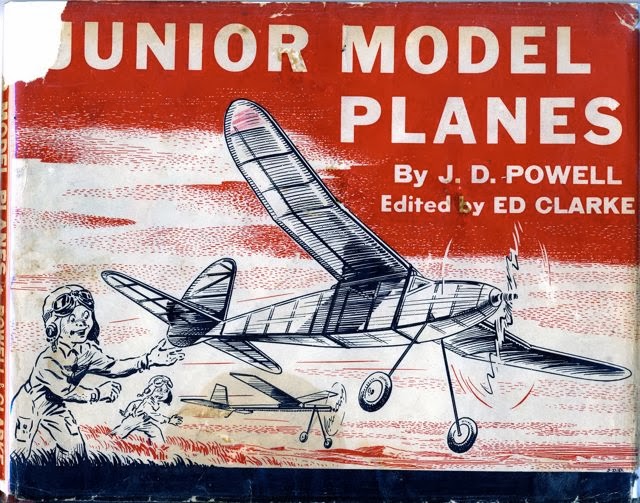 [1] I bought this book last summer at a used bookstore in Sidney, British Columbia. For me, Sidney is a great place in that it has the highest concentration of used bookstores– all within a few blocks of each other - than any other place in Canada. It’s also by the ocean, I can walk everywhere, has many great places to eat or get coffee, and is nearby lots of beach access and wineries. I was roaming through the Haunted Bookshop and saw that they had an entire case of streetcar and rail history books, with lots more placed here-and-there in other cases – quite unusual in my experience, especially all the streetcar related books. Well, I wanted to buy them all of course, but having limited space back home, and wanting to keep peace in the family :-) , I decided cherry-picking just a few of interest was the best course of action. That’s when I stumbled across Junior Model Planes. One look at its good condition and charming illustrations, I knew I had to have it. 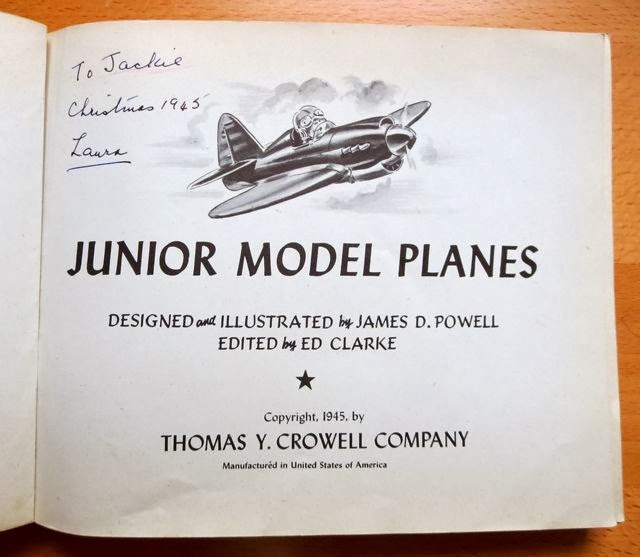 It was published in 1945, and from the inscription on the title page, it was a Christmas gift that year. I don’t know either Jackie or Laura, but whoever had possession of this volume over the years took good care of it - or maybe it was just forgotten in an attic - and I plan to do the same. A few pages have some annotation in red ink, but it adds to the charm, as they look like marks or reminders that were entered as someone worked on a project or two. A few knife cuts suggest the book might have been used to back some cutting. Still, the whole package, notes and cuts and all, makes for a very nice artifact. 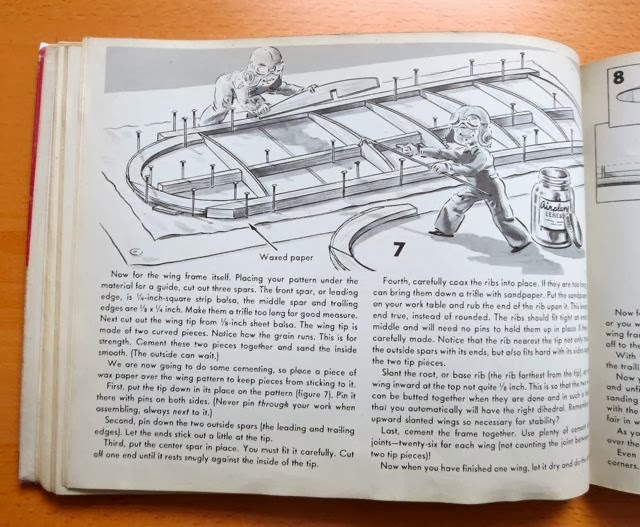 The introductory projects deal with simple glider-like models built from sheet pieces of balsa. The later projects are more complex and demonstrate the classic method of building up wings and fuselages from a number of small balsa pieces on a flat board, as I’ve done with Caleb’s. 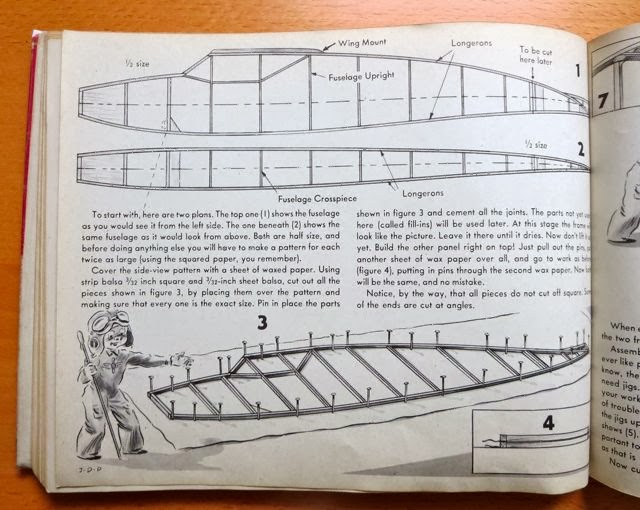 It’s been a long time since I’ve built a balsa airplane according to the methods shown in this book. I got a bit turned off as I’d spend a lot of time building a plane, only to see it get damaged – undoing my work – during the initial test flights to get the thing trimmed and balanced.
Posted by J D Lowe at 1:41 PM