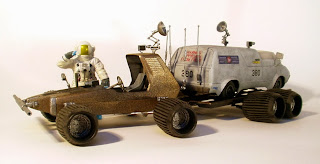 A few weeks ago I took my other blog, retroDynamics, off-line. I can’t really post to two blogs and do justice to both. Since 30Squares is the more active, I’m keeping it going and retiring retroDynamics. So, from time-to-time they’ll be non-model railroad posts appearing here, but I don’t think they’ll be too thematically different to be overly disruptive. Anyway, with the end of the year approaching, I’ve been getting all philosophical, so here’s one of the more philosophical posts that appeared at retroDynamics a couple of years ago.

I’m not an award winning scale modeller. I just enjoy building. So, you’ve got to view these observations in that light. Since I got back into model building I’ve come to appreciate three attitudes that have made building more enjoyable and, oddly enough, my projects more successful.

1. Don’t be too prissy
Sometimes I get completely fixated on making some little detail turn out just right. Sometimes I’m successful and sometimes I’m not. Sometimes I’m able to figure out when something won’t be perfect, but will be good enough and then go on. I try and recognize when I’m spending lots of time on something I don’t have the skill to pull off, and whose completion won’t make much difference to the end result anyway, and then go on to a more important task that contributes either to the overall plan or a feeling of accomplishment.

2. There’s no time clock.
James Carse’s book Finite and Infinite Games was something of a revelation. For me, model building is an infinite game. You can enter and leave the field of play at anytime. Projects are not governed by schedules, project plans, work-break-down-structures or deadlines (or even the instructions in the box for that matter). If it takes a year to build something you like, that’s ok. If it takes two weeks that’s ok too. Model building, like anything else, can be a finite game, but it’s not usually that way for me. Projects are much more fun when I don’t fret over my rate of progress.


I used to worry that I’d mess-up some subassembly so bad that I’d be unable to continue with the rest of a project. I’ve finally learned that just about every ‘mistake’ can be corrected, or some alternative can be pursued that can be even more interesting than the original plan, or if all else fails, a replacement kit can be bought.
Posted by J D Lowe at 6:12 AM