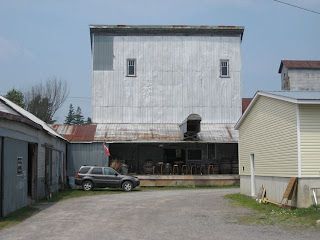 When Debra and I were traveling through Prince Edward County in the summer we made a stop at the Armstrong Glassworks in Wellington. We’d never been there before, and I was surprised to see a relatively large old mill complex standing directly behind the shop. While Debra did some browsing, I did some photographing.

It’s visually quite an interesting complex, and it immediately struck me as something that might have sprung from the pages of an old E.L. Moore building article. It looks like it was originally some sort of mill – we were making a quick stop and I didn’t have time to hunt someone down to ask questions and take photos at the same time – that now houses businesses for making new household objects, like chairs, from barrels, a marble works and a recycling facility.

I’ve always wanted to do an original building in an E.L. Moore style, and this one struck me as the perfect candidate.

For purposes of getting started, you can think of this complex as having two major parts: the barrel and marble works on the right, and the recyclery on the left. The barrel works is that 2 or 3 storey tall structure in the centre, and the marble works is to the right of it in the smaller, appended annex.

So, here is a photo walk-around of the first part. 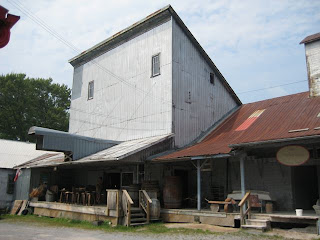 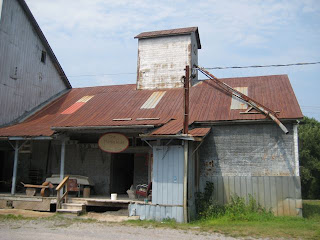 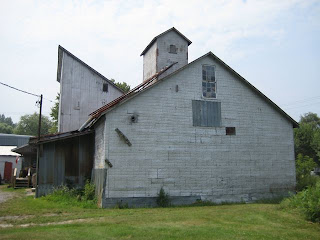 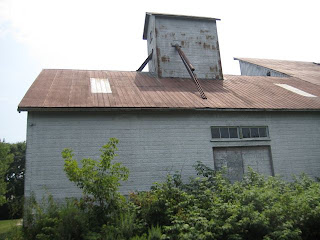 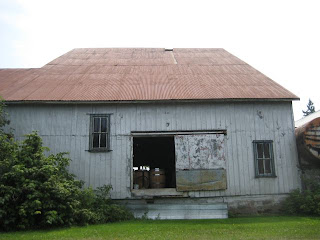 And here is a photo walk-around of the recyclery on the left. 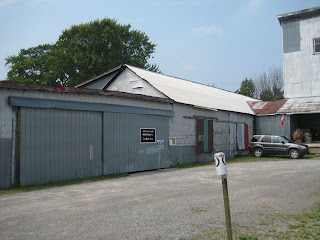 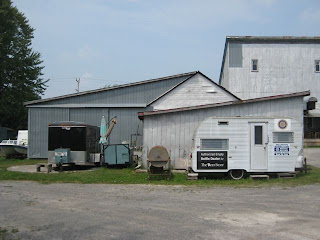 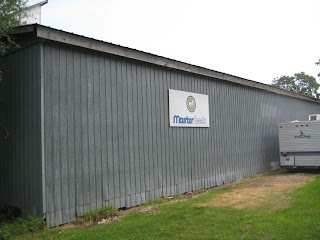 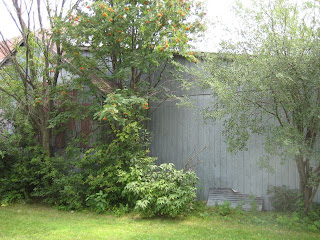 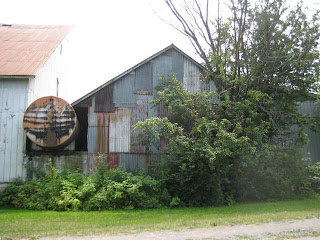 One could take a variety of approaches when turning this into an HO-scale building for a model railroad. It could be ‘restored’ to its original use for railroads set in an earlier time-period. Or, one could just chose to model the centre section since it’s very distinctive on its own. I chose to model it in its present-day, 2010 form, but selectively shrunk it to fit on a smallish model railroad, and with the back wall remodeled a little to accommodate a simple rail siding. I’ll probably make other changes as I proceed, but those seem like a good starting place.

I started by making a rough sketch of what I thought the building looked like from the photos, with various dimensions downsized. You could use a drawing tool like Sketch-Up, but I’m happy with pencil-and-paper. At this stage, I’m just trying to understand how all the major parts will fit together, and the tactile immediacy of a pencil seems to help me. 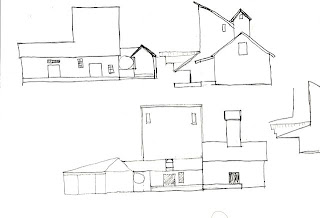 Next, I decided to draw a little more accurately the outlines of the walls for the first part of the structure. I just used an HO-scale rule, a square and a pencil for this task. In sizing the complex, I have assumed that the plans must fit on 2 or 3, 8 ½ x 11 pages, in HO-scale, as if it were an old-school E.L. Moore article. At this stage I’m not concerned about all the details you’d find on finished plans, I’m just trying to work out the major dimensions and get it to look pleasing. 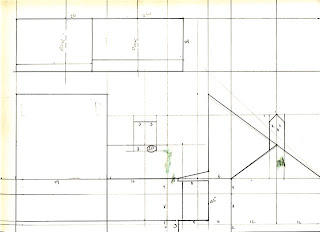 For windows and doors, I’m again going to forego using the classic techniques that Mr. Moore applied and use plastic moldings. I bought a window and door selection from Tichy Train Group last year, and I laid out some on the plans to see what might fit. Once I’ve cut out the walls, I’ll draw in and cut out the window and door openings directly in the wall material. At present I’m just checking rough fit, and to see if I’ve got suitable parts for this project. 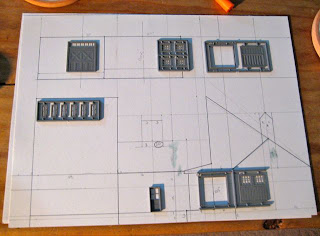 I set the scaled drawing aside for awhile. Something wasn’t quite right. I think I drew the front and back walls of the marble works a little too short. I think it should be about the same length as the barrel works: 24 feet, instead of the 20 on the drawing. I’ll also make the recyclery 24 feet long so that everything looks balanced. Anyway, it’ll be interesting to see what it looks like in plastic.
Posted by J D Lowe at 6:59 PM