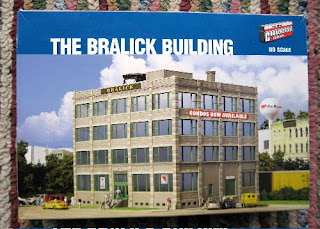 I started this project back in the spring and set it aside as summer activities started to get going. I thought I’d at least post the beginnings of this project as sort of a prod to myself to continue with it in the fall.

This imaginary factory is based on Walthers’ Bralick Building. The reason I bought this kit a few years ago was that it was on the sale table at a hobby store for a very low price and I liked its windows. In some ways, it’s rather odd as a model railroad kit. It’s basically a big, four-storey box that takes up a lot of real estate and doesn’t directly serve the railroad other than as a filler structure for a city. 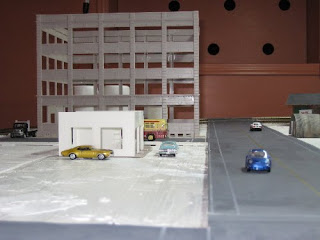 When I started building this railroad back last fall I decided to glue-up the walls and try placing it on the layout to see how it would look and where it might fit in. It was big and imposing. Too big really. Over a period of weeks I placed it in various locations and thought about it now and then. The dilithium crystal angle didn’t come to me until I was just causally showing off the train table to some visitors.

I’m not too sure how this project is going to develop. About the only two certain things are: it’s going to have a roof-top landing pad for shuttle-craft, and a loading dock for freight cars. Beyond those things, I’ll see what happens. 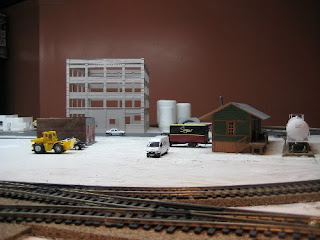 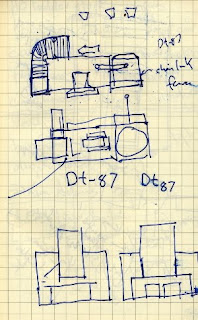 Obviously, a roof-top shuttle-craft landing pad needs a shuttle-craft to land on it. I had this Johnny Lightning Galileo shuttlecraft on my desk. 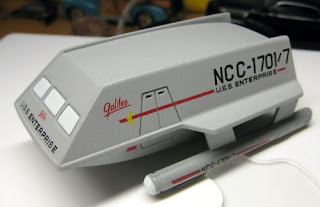 Staring at it while doing bills was probably what started this project cooking in my subconscious, so it was a given that it would be a key feature. The packaging has long been discarded, but an internet search suggests it’s 1/64 scale, a little large for an HO setting. However, with fictional items like shuttle-craft, strict scaling – in my opinion – isn’t too important. As long as it appears to make some sense with respect to the overall scene, that’s good enough. In most cases this means that as long as it doesn’t look out of place with nearby figures and paraphernalia in the scene, then it’s ok.
A quick browse through the old Star Trek Technical Manual indicates the ‘real’ Galileo shuttlecraft is about 23 feet long. Using the HO-scale ruler, this particular model measures 25 feet long. They seem pretty close, which seems odd given that this is allegedly a 1/64 scale item. In the end it really doesn’t matter since when posed with HO-scale figures and vehicles it looks like a reasonable size. 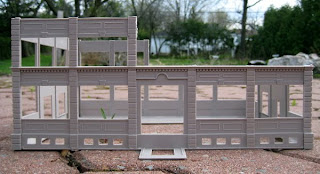 At four stories, plus some more for the landing pad and associated structures, this building was going to over shadow everything else on the railroad. I decided to cut it down as shown. The lowest part will be the landing pad and the taller section will be a hanger facility. If you’re going to build something similar, don’t do the dumb thing that I did: cut the walls down to size after you’ve glued them together into one, very solid unit. Cut them down before gluing. I used a sprue cutter to do the rough cutting, and a dremel and sanding sticks to clean things up. 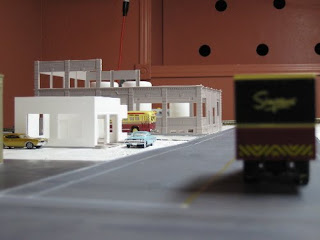 You might be asking, what’s this got to do with Ontario? Well, nothing. Other than that I’ve watched a lot of Star Trek in Ontario.
Posted by J D Lowe at 8:50 AM