Wow. I can’t believe this is the 7th post in this series. Well, maybe I can. One of the recurring thoughts I had during this project was that there is a large number of sub-assemblies that make up this complex. There are: two buildings, a silo, a railside loading dock, an office stoop, dust bin, metal siding, wood siding, wood doors, metal sliding doors, metal roof, tarpaper roof, a complex roof line, signage, cool rooftop piping detail, open windows, and so on. It’s all this stuff that makes this visually interesting, but it also takes time because it’s completely scratch-built. As I mentioned in the first post, the elapsed time to build this project was 6 weeks. As the end of the first month started to creep up, I started taking fewer pictures, and concentrated more on making progress to bring the project to completion.

Hopefully in this post I can wrap-up with a discussion of some of the various smaller scale sub-assemblies. In future construction-related posts I’m going to try and refine my presentation style down to 1 to 3 posts for a build to make the story more succinct. Live and learn.

The railside loading dock is built up from balsa strips as specified in the article. The stoop at the office door was built the same way as is the framing around the roof-top cyclone on the addition. 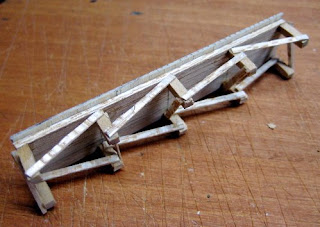 Mr. Moore recommends making the roof top piping for the delivery system from balsa strip that has been shaped into cylinders and wrapped with paper. I substituted with roughly equivalent diameter styrene tubing as I did with the silo pipe. 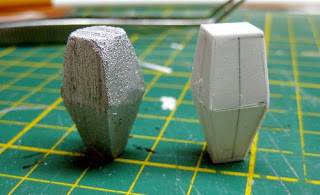 [Carved cyclone on left; built-up on right]
He also recommends making the cyclone dust collector that is atop the addition roof from a carved piece of balsa. I tried that, but I didn’t like the look. I redid the piece by building it up from 0.012 inch sheet styrene. Unfortunately, my cyclone tapers to square ends, and Mr. Moore correctly gives the ends a circular planform to match the incoming pipes. However, I’m happier with the built-up version since it appears – at least to me – to be more symmetrical and has smoother sides. It’s painted Tamiya flat aluminum. 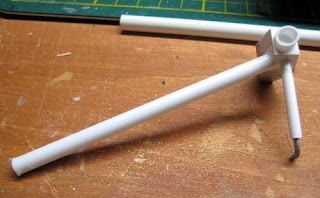 Sizing and installing the pipe was a bit of a trial-and-error affair. I worked back-and-forth between the article and the model to more-or-less get the sizes and placement of the components correct. To get things assembled into a fairly rigid structure, the styrene tubes had a small bit of wire glued inside each end. These wires were then super-glued into neighbouring tubes to get the whole pipe assemblage to hold together. The joints were then loosely wrapped with paper scraps – although it’s maybe a little too loose in some instances, but overall, it adds to the slightly haphazard and organic look of the place 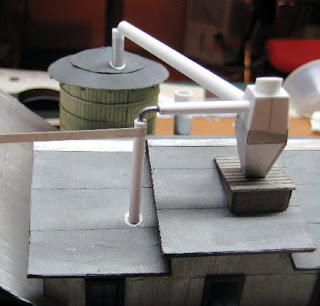 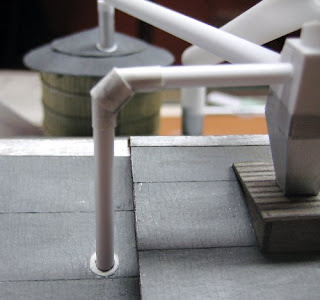 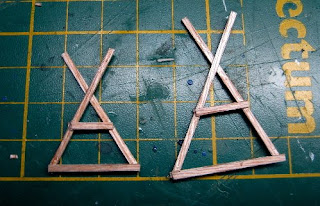 The roof over the main doors on the addition is made from balsa as per the article and roofed using the same masking tape method used on the addition’s roof. I’ve you’re building along with this story, use sheet styrene instead – I’m sounding like a broken record on this point ! – to eliminate warping during assembly. 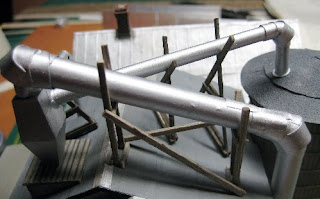 The main sign on the barn was simply printed with my computer. I used white letting on a black background to make the words stand out a bit more since the barn is a deep red-brown shade. I also changed the establishment date to ‘1973’ in honour of the article’s publication date. 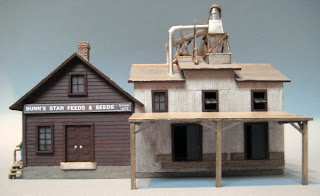