On the trail of Gil Mellé’s Industrial Model Works

Awhile back I read in a biographical note RMC ran in 1964 on Gil Mellé about a model railroad structures company he once ran called Industrial Model Works. I didn’t think much about it at the time, but I’ve started to wonder what the company produced, and where it was located. There doesn’t seem to be much information out there, and I wouldn’t even know about the Gil Mellé / Industrial Model Works connection if I hadn’t read about it just by chance in that ancient issue of RMC. I’ve done a little digging, and here are a few things I’ve found so far. 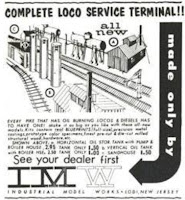 I looked around for ads. I couldn't find any in RMC or Model Trains, but did find a few in Model Railroader. That one on the left is from the November '58 issue.

The Loco Service Terminal kit could be bought complete, or as individual pieces. The complete set up gave you a boiler and pump house with a horizontal oil storage tank, all for $2.95. There were also vertical oil tanks and sandhouses you could buy separately.

In December 1961, RMC ran two Gil Mellé articles: one was called Vertical Tank, and the other, Pump & Boiler House. Likely the kit and the articles are one in the same. Also, an article for the horizontal tank appeared in a April '62 RMC called, Horizontal Oil Tank.

And, last but not least, down in the ad's lower right, the company is located in Lodi, New Jersey. 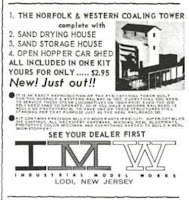 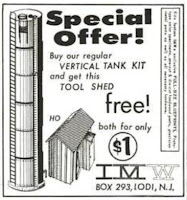 This ad for a vertical tank and a free tool shed ran in the January '59 issue of MR. The tank looks like the one that came with the loco service terminal.

There's no mention of See Your Dealer First. This time the ad has a P.O. box in Lodi for you to buy direct. Maybe he wanted to get rid of odd stock that dealers didn't want to handle.

An internet search turned up this photo of the contents of the vertical oil tank kit. It looks quite basic, but that's typical for the kits of the time. 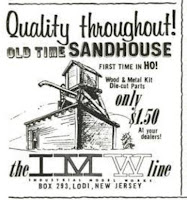 This is the last ad I've found so far. It appeared in the March '59 issue of MR. Maybe that sandhouse is a repackaging of the one offered in the loco service terminal?

The March issue also ran a review of the loco service terminal in the Trade Topics section. The review sticks to describing the kit, and doesn't make a recommendation, although it does state the model is based on a prototype found along the Louisiana & Arkansas RR at Shreveport, Louisiana.

I should also note that the November '61 issue of RMC ran a Gil Mellé article called, Old Time Sand House.

On the right is the box for the old time sandhouse kit. On the left is what looks like a 'BLAW-KNOX Concrete Plant' kit, also from Industrial Model Works, which I haven't come across an ad for yet. 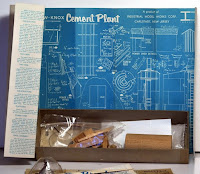 That Concrete Plant / Cement Plant seems like a more involved kit. The plans look amazing, and, interestingly enough, they state: A product of Industrial Model Works of Carlstadt, New Jersey. Some more internet searching shows that Carlstadt is around 10 miles south of Lodi. And Lodi is around 15 miles south of Ramsey, NJ, where the RMC office was located in the 1960s. So when Hal Carstens noted in the February '62 issue of RMC that RMC author Gil Mellé dropped into these hallowed walls recently with his latest creation,if Mr. Mellé  was living in Carlstadt or Lodi or somewhere thereabouts, dropping by was fairly easy to do. Gil Mellé's IMDb entry states he didn't move out to Los Angeles until 1969, so I suspect he was living somewhere in New Jersey until then. Maybe he ran Industrial Model Works out of his basement or garage?

Image sourced from this ebay entry - looks like a good deal!

It looks like what might have happened to IMW and its kits is that Mr. Mellé produced a number of them in the late '50s, maybe couldn't make a go of it, closed down the company, switched to writing articles in late '59 or early '60 (his first publication was in RMC in October '60), and used a few, or all, of the kits created by IMW for several articles. Maybe articles were the best outlet for him because he wrote about a number of very sophisticated projects that might never have seen the light-of-day if he was concentrating on mass-market kit production. But, this is all speculation.
Posted by J D Lowe at 2:17 AM